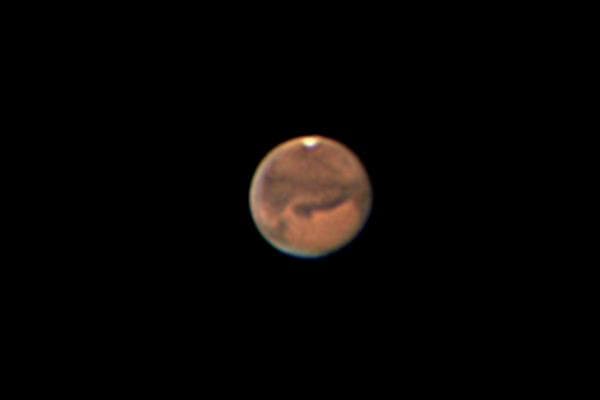 The time to see Mars is now (well, soon!)

How to observe Mars this opposition

Mars reaches opposition on October 13, but is closest to Earth on Oct 6. Don't worry if you're clouded out - you've got some time to see the Red Planet at it's best in 2 years, and the best it will be until 2033.

The 4th planet from the Sun, Mars, has fascinated Earthlings for centuries. Within the past few decades, we have confirmed that there are no Martian canals or civilizations - at least in the "little green men/women from Mars" of science fiction. But in the meantime, humans have sent no less than 56 missions to Mars to learn more about it (fully half of which failed either to land or operate when they got there). And we have indeed learned much - water existed there in the long-distant past, and there are HUGE volcanoes and valleys that dwarf anything seen here on Earth, despite the diminutive size of the planet compared to our own.

But the orbits of our planet and Mars are elliptical. And they are elliptical in such a way that when mars is "closest" to us, it can indeed be quite far - as much as 62,620,000 miles, yet as close as 34,600,000 miles. That's quite a difference! And with Mars being just slightly more than half the size of Earth, that means when we view it through a telescope, it can either appear moderately large when Mars is close, or... not so large.

Whew! That's a while.

So, this is the best we're going to get for at least 26 months (when it will be "further away / closest to us again" but smaller than presently). On October 6 it will reach an angular diameter of 22.6 arc seconds. For Mars - anything above 10" is helpful. Often it teases us at anywhere from 4" to 6" in angular diameter.

A quick aside to explain that: Arc seconds are NOT very large units of measure. In fact, they are quite narrow.

But... with sufficient magnification and some patience, it is possible to see some details on Mars. I'll eplain first how to find the planet, and then how to see that detail and what details to try and see.

On October 13 at opposition - and pretty much for a few weeks before an after - Mars rises in the eastern sky a little after sunset. It reaches culmination around midnight - this is its highest point in the sky, and generally the best time to view as you are looking through the least amount of atmosphere when it is high up. And then it sets in the west around the time the sun is coming up in the eastern, morning sky. 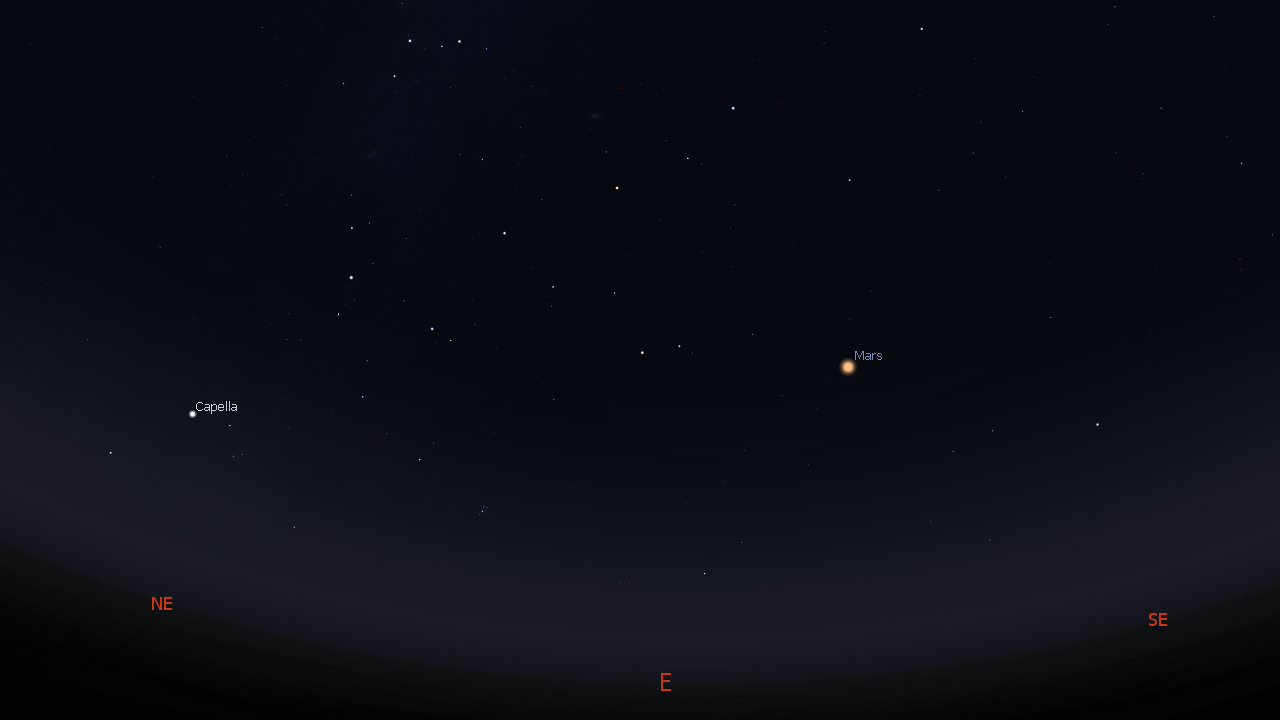 Mars in October 2020, about 3 hours after sunset

So ideally, look for it at midnight when it is highest in the sky. But... work / school / weather don't always make that possible. And here's the thing: Mars is indeed at it's largest October 6. Yet it is still over 20" in diameter until the last day of October. So you have ALL MONTH to take a shot at looking at the next planet out from us in our solar system. 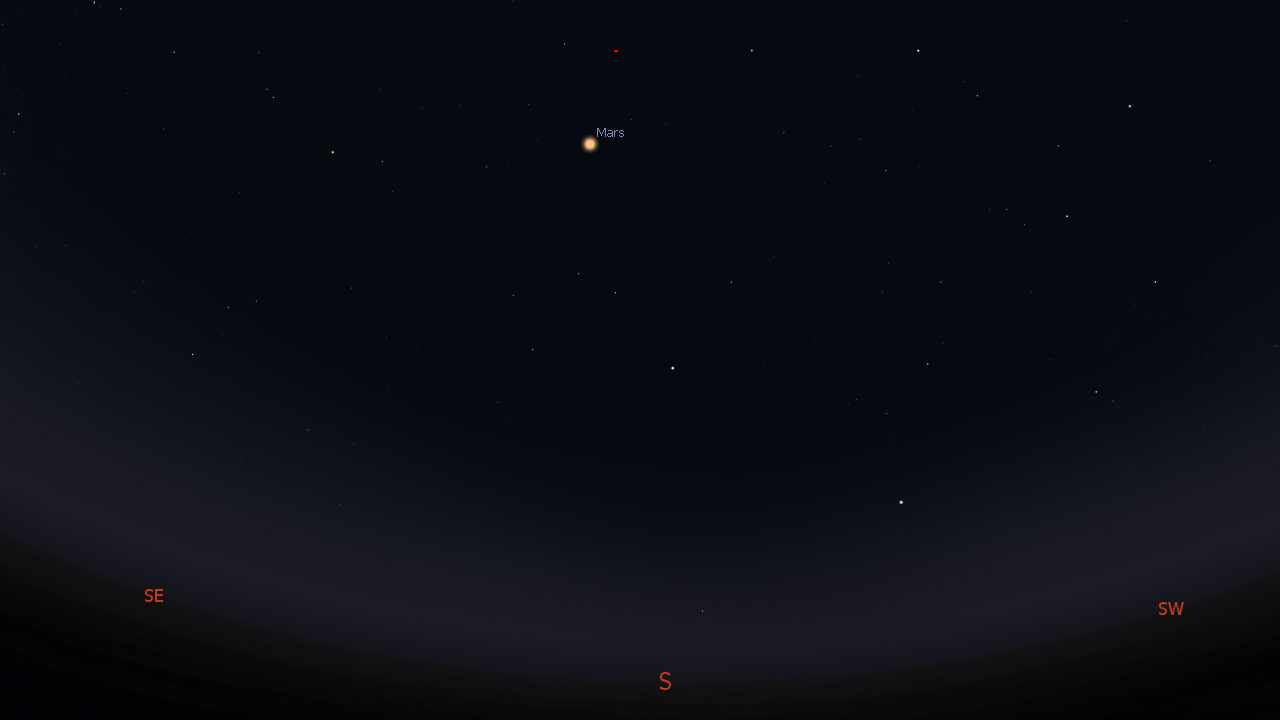 Mars in October 2020, around midnight

And the thing is, you can't miss the planet. Only two things in the night sky are normally brighter - the Moon, when it is in the night sky, and typically Jupiter. But Jupiter is quite a bit further west, and it is much more white - and Mars actually outshines the gas giant planet right now, by about a 1/3 of a magnitude, not to mention it is noticeably orange/rusty in color. Plus... as with most planets, it won't be twinkling.

Stars twinkle. Planets generally do not. That should make spotting Mars right now easy. Plus.. now you know where to look, and when!

How to observe Mars through a telescope

For one, use as much magnification as your telescope will support (don't exceed 50x of magnification for every inch/25mm of aperture). And push that up until the atmosphere says, "Nope, too far!" That may be 150x, 200x or even 250x. But if you have an 8" or larger telescope, do try for that 300x or 400x. I recall one opposition when I pushed my 10" Dobsonian reflector to 500x and Mars was magnificent!

However, that takes a very steady atmosphere between you and the planet. Avoid heat-releasing sources such as houses or parking lots. If you have a reflector telescope with a larger mirror, be sure to put a fan on the mirror an hour or two before you go outside so that it won't be contracting (and slightly distorting the image) while you're observing, or worse, releasing heat up into the tube WHILE you're observing.

I have some more planet observing tips here.

How you can know this is happening is defocus Mars (or a star) and look at the defocused image. It should have a nice pattern of rings that are steady. If it appear "boiling" then your mirror is releasing heat (or there's a source of heat in front of you - in open frame type Dobsonians, that heat source could be YOUR BODY).

Another thing to do is be patient. Even on the steadiest of nights, the image of a planet often goes from being steady and detailed to not-quite-in-focus/not-quite-sharp. WAIT for the moments of steadiness. And don't discount a hazy-looking night - those are often inversion layers, and can be the steadiest of skies! You many not see many stars, but Mars is at about magnitude -2.6 right now - nearly as bright as Jupiter! So it may be one of the few things punching through the cloudiness/haziness. DO look for the red planet then - it may be the best view you've ever seen.

And what to see? The easiest is usually the southern polar cap - it's a small, white spot, as seen in this photograph I took a few weeks ago. 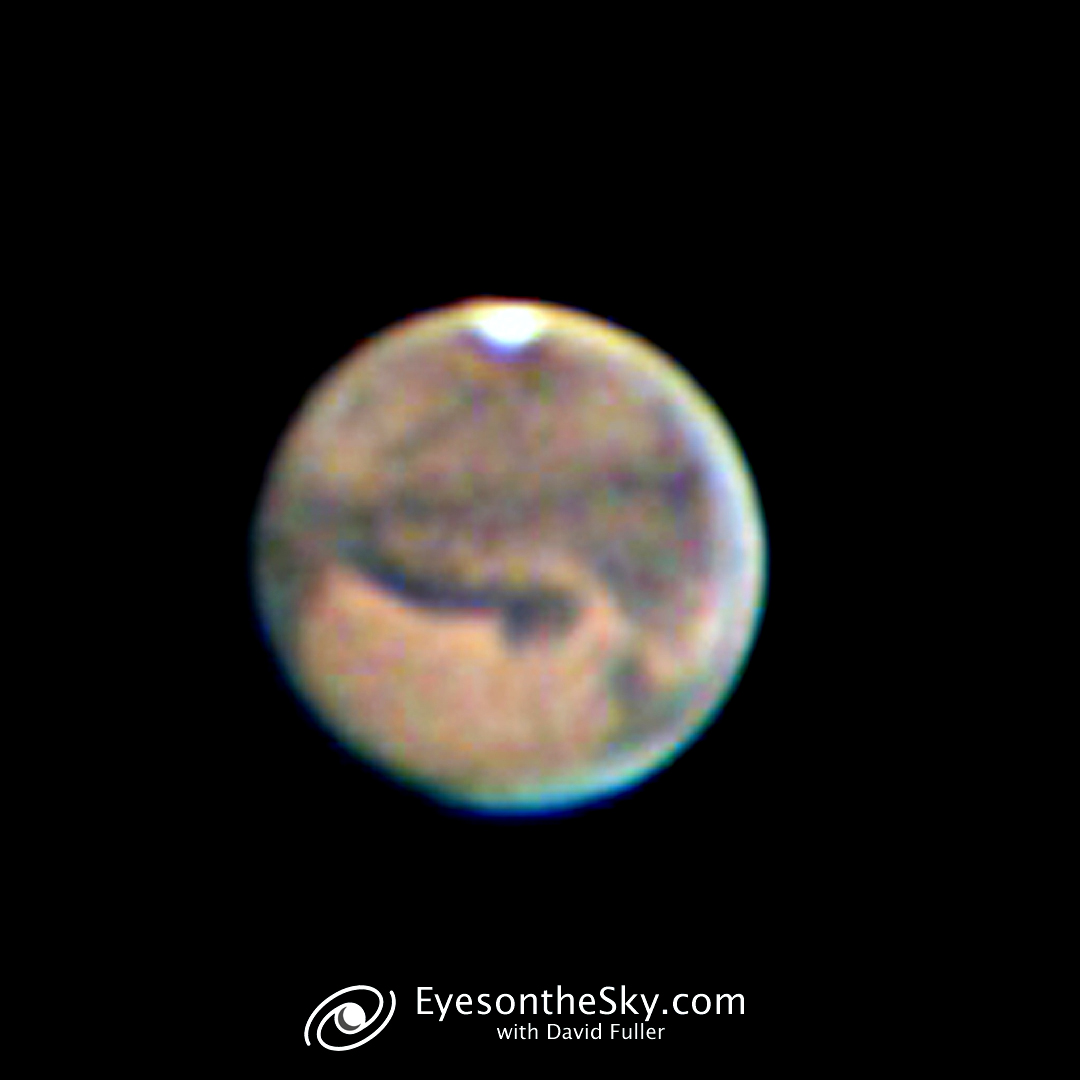 On the right side of this image, note the morning haziness and hig clouds visible. And the larger but largely hidden northern polar cap has clouds near it, visible as a white-ish haze near the bottom of this photo.

Mars also displays lighter and darker regions. The darker areas, just like our Moon, are called maria. The most notable one is Syrtis Major, a "V" shaped area that is easily seen at higher magnifications under steady skies. My friend and occasional observing companion Dave Sommerfeld got a wonderful image of Mars showing Syrtis Major on October 4, 2020, here: 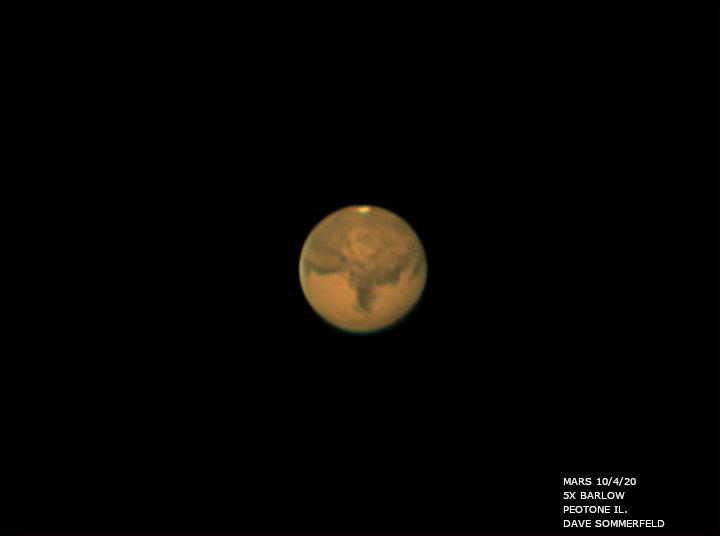 Want to know what  you're seeing on Mars? Here's a handy tool that shows you what the features are on Mars for whatever the current time is.

Can you use filters? Yes, if you have them. They may not be necessary. For quite large telescopes, a neutral density filter may help cut down some of the brightness. A red filter can help the polar cap(s) really pop. An 80A lilght blue filter can enhance your ability to see atmospheric haze or clouds. I personall though a #58 green filter provided the best contrast of many features all at once - maria were more distinct, as were the polar caps.

But if you don't have filters, don't despair. They aren't magic, and truly, they don't help THAT much. They just help people to see details that are already present, but which we may overlook due to the brightness of lack of contrast.

You've got a month and half - go see this planet! Want some more info? Check out my video on Mars here: