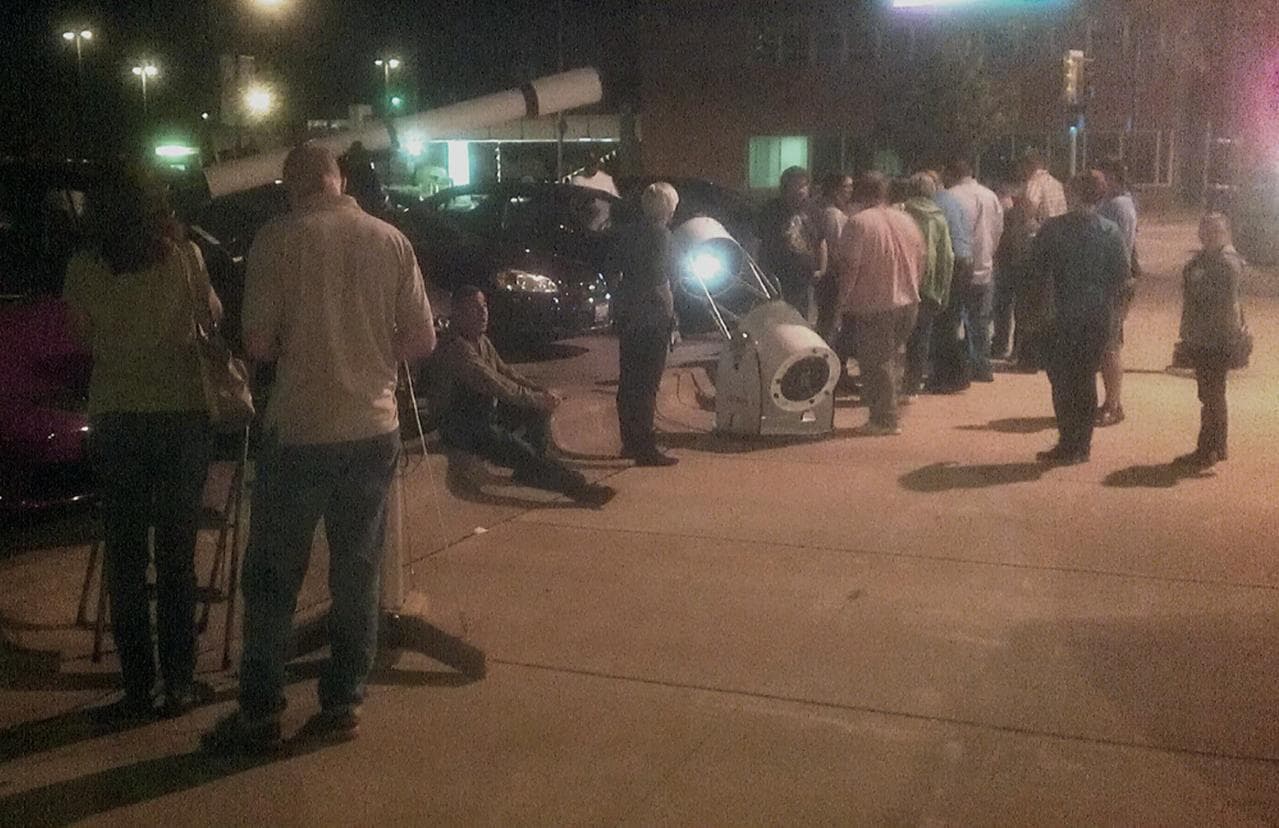 A month or so ago, I met a gentleman named Chris who is part of a group that is trying to revitalize the downtown Kankakee area by supporting artistic endeavors. What they do is very wide-ranging, and last month he asked me to introduce one of their film nights, "2001: A Spacey Odyssey" that he indicated I could talk about anything I wanted that had to do with space. After doing that, we talked a bit about what other ways we could collaborate. We decided to do a "Sidewalk Astronomy" event, and it was held last night. We did not do a lot of promoting of the event - a few Facebook posts and shares, but not much else. I also highlighted the event with the Kankakee Area Stargazers club and two of our members offered to join me.

It turned out to be a GREAT night.

Originally I had planned to start at 8:30 with a short 20 minute presentation on how to read a star chart, but decided that with Saturn being so low in the sky (it would set behind a building by about 9:00 from where we planned to set up), we looked at that first, THEN did the presentation. Oddly enough, that turned out to be a good decision, as instead of only getting the people who knew about the event from Facebook (about 8-12 people), we wound up getting 20 people for the presentation! And since I ALWAYS mention light pollution in every presentation I do, I was able to talk a bit about that to more people than I'd even hoped was possible. Passers-by of nearby shops plus people driving by on the streets saw my 4" f/15 scope, and it piqued their curiosity, so they came in to learn more. My attached photo shows probably less than half of the people we catered to last night.

Of course, as you can see from the photo, we had a LOT of lights to deal with at our location that severely limited our viewing options. But no matter - the Moon was out (it happened to be International Observe the Moon Night), we could see Saturn, and I was able to target Albireo successfully. The thing about sidewalk astronomy is that we often don't need to show galaxies or "faint fuzzies," the "showstopper" objects often will do just fine. 2 or 3 objects is all most people will take the time to view, so it works out well when you have three scopes as we did. My friends Sean (who's active on the ATM section here at CN) and Joel had their 16" and 8" scopes, respectively, with my refractor rounding things out.

But the best part was towards the end of the night. A family had been driving by the street we were adjacent to, and they pulled over and stopped to talk to us. They were directed to me, and it turns out the young boy in the family was incredibly interested in all things space. He looked through the scopes, his parents asked great questions and were very appreciative of what we were doing and the info I shared, plus they are likely to come to our next club meeting!

Now, I do want to point out that Kankakee is a city that has its challenges. There's crime that's higher than the state average. There are people who are not well off financially. But when you look people in the eye, treat them all equally, and invite them to look through your scope, it is amazing the responses you can get from just about everyone. Yes, there's some "safety in numbers" that helps, no doubt. Yet it was so encouraging to be in this downtown area, with it's eclectic mix of shops and drinking establishments (a Christian bookstore and the library nearby too) and to share the night sky with such a diverse group of people. Young, old, black, white, differing financial backgrounds... and everyone was there for what they could see in the sky.

And that's the key: The sky belongs to everyone, and sharing it with others has a way of bringing people together in a way that you often don't find with other events. My friend Chris and I were extremely encouraged by the turnout, and the positive response by all those who stopped by, planned and unplanned. We're definitely going to do this again, and I'm really looking forward to it.