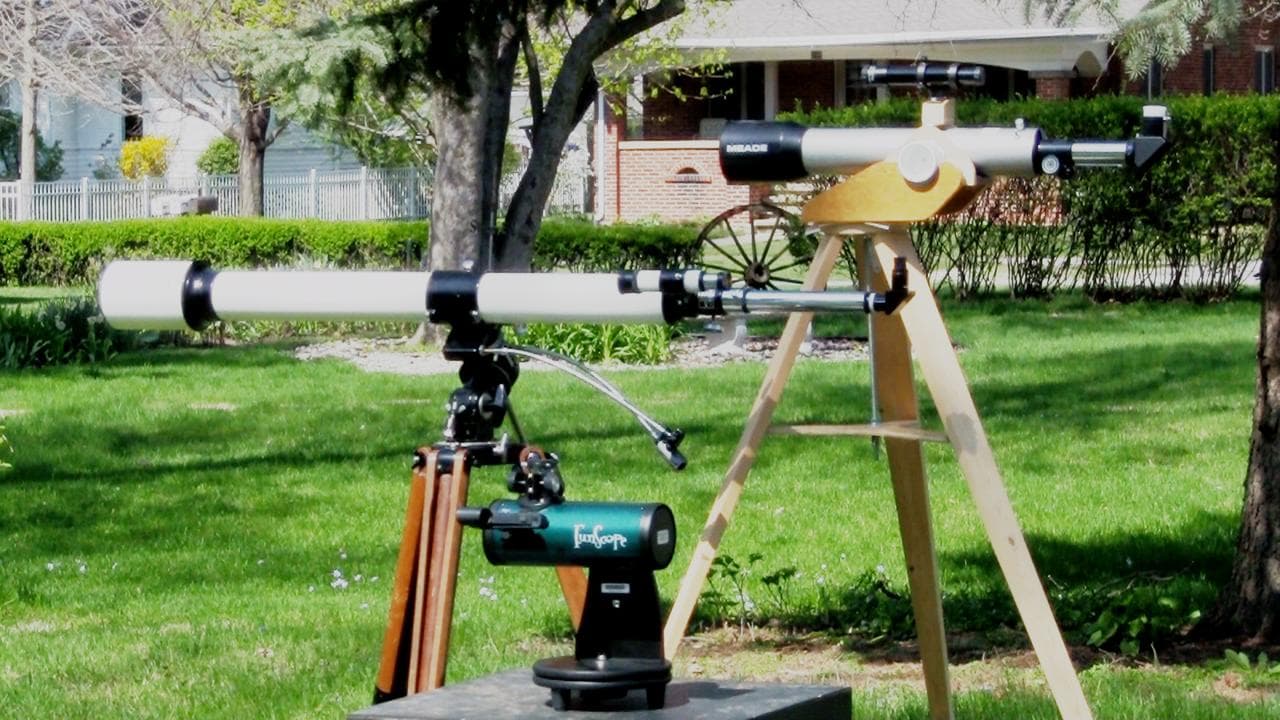 A question often asked on beginner forums or on reddit astronomy boards is, "What telescope should I get?" or "What is the best beginner telescope?"  There's a helpful - if older - article from 2010 by Sky and Telescope that covers some (at the time) sub-$100 telescopes, all of which are more than that now by $10 to $30.  That's a good place to start.  But sometimes the budget is more (or less!).  So what to do from there?  There are SO many choice today, it's hard to know what to get.  Here are some recommendations I think may help.

First, watch these Telescope Basics videos.  Even if the telescope is not for you, it will help you understand the types of telescopes and accessories, and what a user may be able to see more easily with one.  It will only take half an hour or so.  It's well worth the time to choose the best telescope.

Second - and this is a recommendation hear a lot - consider binoculars. Or at minimum, leave some budget for a low-cost pair from Amazon (Celestron Cometron 7x50's price in 2020 when I updated this is around $37).  I know, I know - astronomy screams "TELESCOPE!" and not binoculars, which seems to offhandedly remark, "Birding? Mountain-viewing? Neighbor-watching?"  But if the gift is for YOU, and you want to learn the sky better, they really are helpful supplemental set of optics - they assist in familiarizing oneself with the night sky, finding objects up there, starhopping, and besides that, seasoned amateur astronomers ALWAYS use binoculars. They won't go unused, even after you get a telescope.  But I know that's not the first thing on most people's minds.

So... where to start if it absolutely must be a telescope - or if binoculars have already been purchased?  Let's start with the low-end of the budget.

Consider some of the tabletop 76mm reflector Dobsonian type telescopes, such as offered by Celestron, Orion and some other brands. These are so much better than the 50mm refractors of yesteryear. They are solid, stable and provide far more light gathering than 50mm or 60mm refractors - that are often on wobbly tripods.

One accessory you most likely MUST add? A barlow lens. The focal length on these is not long - usually around 300mm. That doesn't allow for a lot of magnification even with a 10mm eyepiece (just 30x). So a 3x barlow will get you up to 90x. That's suitable for planets, the Moon and double stars.

The Sky and Telescope article reviewed telescopes that fall into this category, but there are a couple more I think are worth considering in this price rance.  One is the Orion Starblast 4.5, which is an adequately-sized aperture instrument that will gather decent light and show some good objects in the sky. The included eyepieces will net 26x and 75x, so low power and "useful enough for planets" medium magnification is at least included with the telescope.  A 2x barlow wouldn't hurt, if there is another $40 or $50 available in the budget though.  And functionally, this telescope is similar to the Funscope/Firstscope listed above, just a "bigger brother" version of it - a nice sturdy mount, wide field views, and adequate accessories included.

Drawbacks include the short focal length, very fast focal length which will produce coma (this only affects the view near the edge of the field of view), and the three-element eyepieces included. But for the price, it is a very good value in my opinion. Note: I own an Orion Starblast 4.5, and it offers very good, wide-field views of many deep sky objects, and quite clearly in the center of the field. Overall, a good option. And consider building this simple-to-make, $40 tripod to help you with viewing.

On the flip side of that "fast focal length / coma aberration" coin is the Orion Starmax 90 Maksutov Cassegrain telescope.  With a much longer focal length and a Mak-Cass design, the aberrations are practically non-existent, and the folded-optical path means a long focal length for higher-magnification viewing.  Included eyepieces place the included magnifications at 50x and 125x - useful low-ish power, and a quite-usable higher magnification that is close to most night's limit on magnification of 150x anyway (regardless of telescope, due to atmospheric unsteadiness).  Drawbacks are narrower field of view, which can make it harder to locate objects, a smaller aperture than the 4.5 scope, and a star diagonal that can be in an uncomfortably impossible position to view when the scope is pointed overhead at the zenith.  And from the looks of it, the diagonal may hit the based before it can even be pointed overhead.  But - zenith viewing can be difficult in some scopes anyway, and the recourse to this is... wait an hour or two for the object to rotate to a better position.  It's a worthwhile option to consider.

I have no personal experience with this next telescope, but I have used the mount it comes on.  The Celestron Astromaster 90 EQ Refractor appears to be a decent options.  It's the first one I've mentioned that has that classic telescope "look": Long tube with the eyepiece at the end.  That's partly why this is a qualified recommendation: The tube and scope, while of a focal length that will likely reduce chromatic aberration, is also long enough that it may cause that tripod to be unstable.  Now, I have an Orion 90mm refractor the same length that I use on a Celestron mount that is exactly the same - BUT - I built my own tripod.  My wood tripod is rock solid; I'm not so sure about the legs on that one.  But a 90mm scope can show you a fair amount; I've seen the Crab Nebula (Messier 1) with my Orion (though barely), under my 4.5 magnitude skies.

For about $20 more is the Orion version on their own mount (I built mine from various pieces).  The Orion Astroview 90mm Equatorial Refractor is a telescope tube I own.  The optics are certainly acceptable for an achromatic refractor of this focal length, nicely coated and exhibit only minor chromatic aberration.  The focal length, surprisingly, provides not only nice high magnification views, but even decent wide field ones with a 32mm eyepiece.  I do have a concern about the Orion tripod, as honestly, it looks a little flimsier than the Celestron - the Orion aluminum ones can be rather shaky and unstable.  Note in the picture how the legs are not extened; that is probably the best way to use that, though it also means laying on the ground to view objects overhead - not ideal.  One could fill the tripod legs with sand or put a 5 or 8 pound weight on the accessory tray to minimize vibrations, but in either the Celestron 90 or Orion 90's future, a wood new tripod would be the next best accessory to buy.

At this point, there really is one good option to recommend: An 6" Dobsonian reflector.  A large aperture, solid mount, and great all-around performer, it is truly one of the "best bang for the buck" telescopes out there. These are largely made by the same couploe of Asian manufacturers, as with the telescopes listed above. So the optics are generally more than adequate, the differences tend to be in the accessories provides, such as finderscope, focuser and eyepiece(s). They all weigh about the same, and generally cost is in the same neighborhood from each other.

For a little more, in the $450 to $550 range, this is where the "Get an 8" Dobsonian for a first telescope" comes into play. From my readings, either the Orion XT8, Zhumell Z8 Deluxe  or Apertura AD8 are all worthy options.  None are "premium" telescopes, but that are certainly perfectly adequate performers that can provide literally a lifetime of views, and for under $600, that's a pretty great deal if you ask me.  Of course, collimation will really be required of these instruments, but that is a skill that can be learned.  And Dobsonians, moreso than most other telescopes, are perfect contenders for adding upgrades and improvements.  But these can be added over time.  Out of the box, they are a great option, able to show both planetary and deep sky views that are of very good performance.  If you can make this budget option, it's worth the investment.

What I did NOT include - and why

You'll notice I have not included any computer telescopes or very short refractors or a single Schmidt Cassegrain telescope.  That is not because any of those options are bad, necessarily.  But I do not believe that for the price points I have covered, that any of the options available are worth buying in the prices I have covered - anything worth getting costs more.  (And if you DO have more to spend, by all means, consider some of the good options in the higher price ranges.)

Others may argue that point about what to include in the prices I covered, and are welcome to that opinion.  I just think the above options are some of the best options for beginners getting started, without having to worry about learning difficult to navigate computer modules with batteries that can run out or motors than can die, or telecopes that have aberrations that can really ruin the first-time user experience.  Think about it: If your batteries die, or the computer breaks, or a motor malfunctions, what can you do with that telescopes?  But if it is a manual telescope, you can ALWAYS use it - no batteries or technology needed other than a star map.  Many of those other computerized / fancier / short refractor scopes may make great second options; but strongly consider the ones I have listed above as first-time instruments.

And avoid the 60mm and 70mm refractors, if at all possible.  I have several, and they can be fun to use... on the Moon, and a few (VERY few) bright targets.  After that, they wind up collecting dust.  Consider the options above, if the scope is to see substantial use beyond the excitement of the first few nights, and the budget is around $500 or less.

Got questions?  Email me! I appreciate the feedback, and may have even overlooked a good option.  And also, I have absolutely no financial relationship with any of the companies I mentioned above, so I don't make any money from any of them, not matter from whom you buy.