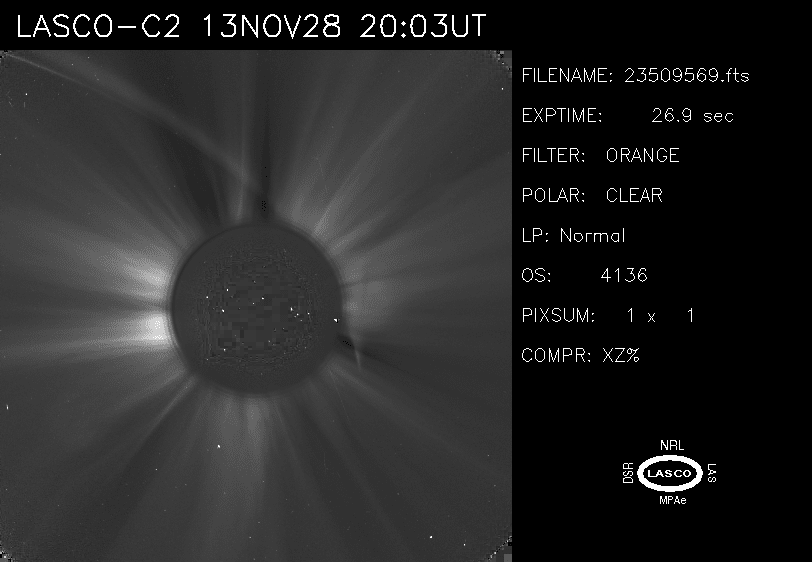 Well the much anticipated, and sometimes overly-hyped as the "Comet of the Century!," Comet ISON (mostly?) disintegrated today as it made it's way in towards the Sun for it's perihelion. Here's a gif movie of it on the way in:

Now, to me, the orbit looks like it was calculated incorrectly. My understanding was that the comet would pass within about one solar diameter of the Sun. It appears to be orbiting well inside that. Did the whole thing vaporize? Disintegrate? What?

Now, it's possible that SOMETHING of ISON survived. There is, after all, this photo of the "aftermath" showing what may be fragments / leftover debris following the ISON orbit past the Sun. But my guess is, there's not much left, but the near 4-o'clock section of this photo indicates something survived the closest approach. The question now is: How much? And will it be something amateurs will be able to see in the coming days/weeks? I'm doubtful, but we'll see.

The conjecture at the time of this writing is that the tail survived, but the nucleus did not. So there likely won't be much to see going forward.

UPDATE: Comet ISON is dead. Check out this graphic, where you can see the comet diving in towards the Sun, and then it hits a jet of material coming out of the Sun.

UPDATE 2: Ever her that song "Not dead yet?" Or see the Monty Python scene where the old man is saying, "I'm not dead yet! I feel happy!" Yeah, that might be the case with Comet ISON: It may not be dead yet!