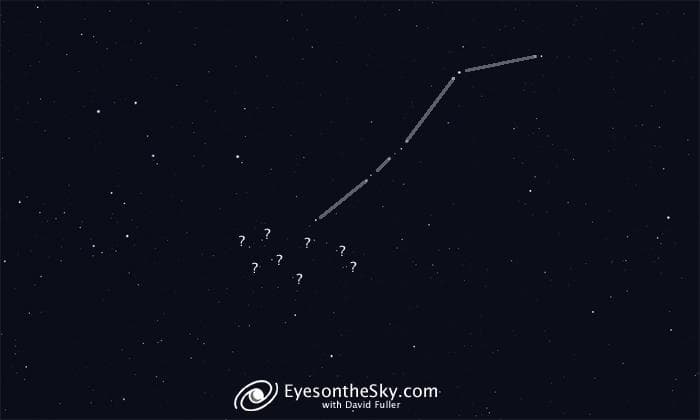 Connecting the dots on starhopping

"What are you looking for?"

"Neat. How will you know what you've found it among all the other dots?" 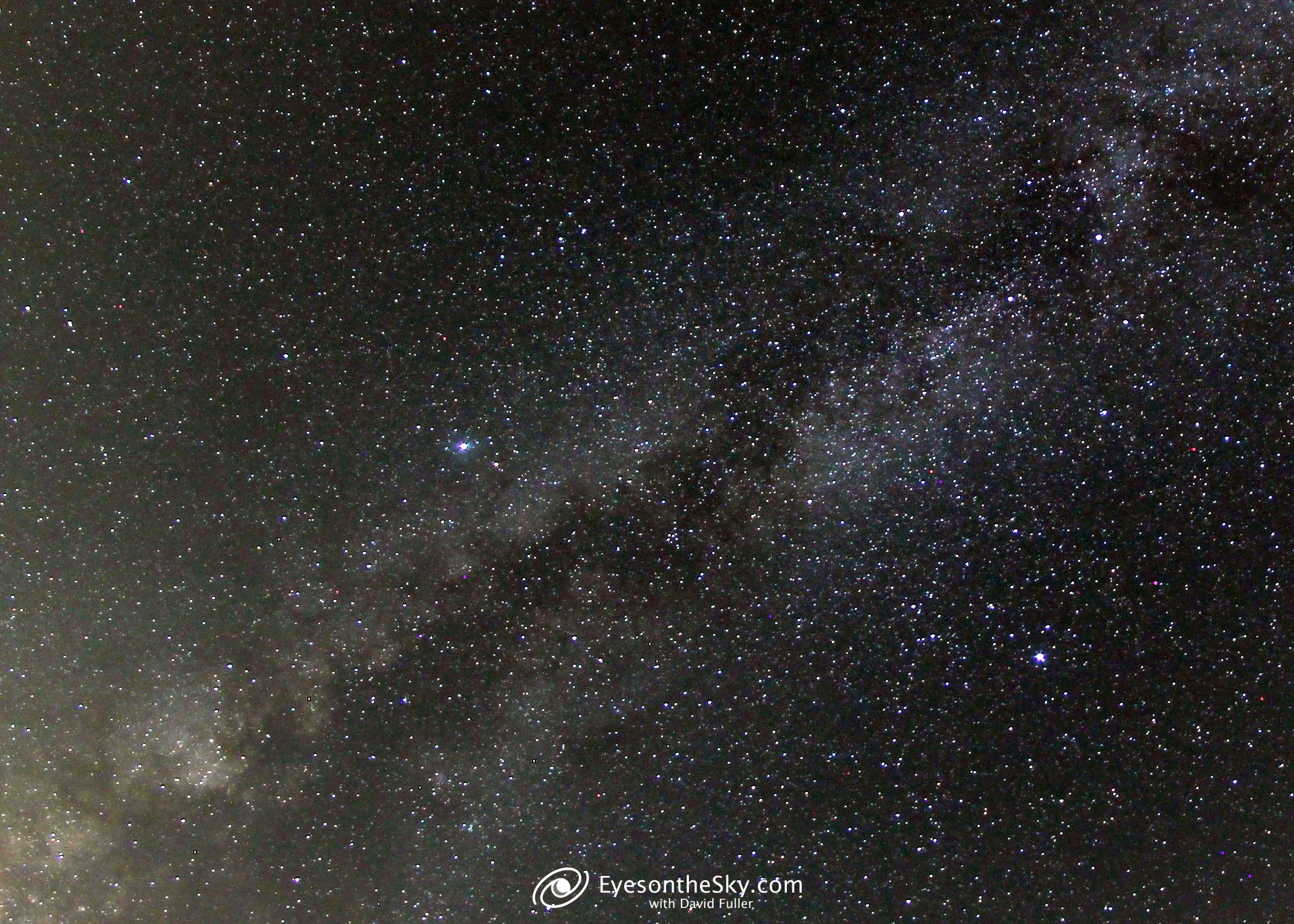 I posted a video recently on how to find Neptune in the night sky. The process involves a little simple geometry - not much more than knowing a halfway point between two bright stars - and recognizing a particular arrangement of stars in the sky. The human mind already assigns shapes to various star configurations - we call these constellations or asterisms.

But not long after the video posted, I got a comment from a YouTube follower. He said,

Dave, your videos make me want to have a non go-to mount. Thanks for sharing!

I thought about that for a minute, and wondered, "How did I do that?"

Then it dawned on me: Part of what makes starhopping fun and interesting is what we see along the way. Don't get me wrong - one of the mounts I own is GoTo. My wife has a Push-To mount. When taking the time to set them up and use them, they are indispensable tools for locating many objects in a short period of time. Align (this can take a little time), find (quickly!) and observe (many objects!).

Starhopping is a little slower - start at bright point, hop through other dimmer stars using finderscope, check charts/maps, maybe repeat process one, two or many times, usually observe, sometimes give up in frustration if you can find the thing in the sky. 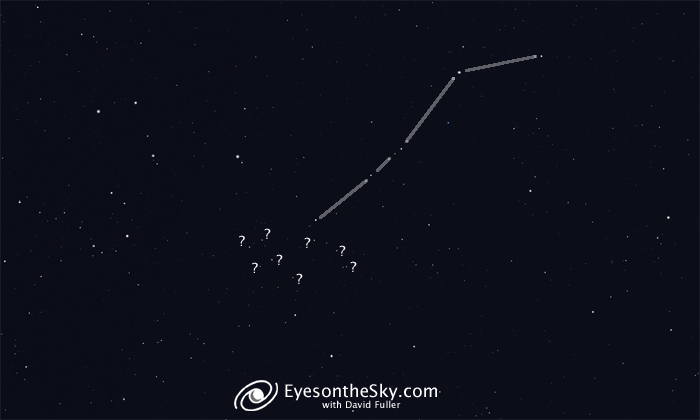 But remember, as life is more about the journey than the destination, so it can be with starhopping. And besides, you'll be more confident of where you are when you know the way.

For example, have you ever been a car with someone who doesn't know where they're going, and their GPS maps stops working? (Or maybe you were driving!) There's near panic.

GoTo is similar. It's great... when it's working. And I realize that not all computerized telescopes are encumbered by motors - my wife's Push-To is a great example of this. See what you want to observe, aim telescope by hand, Voila! Observe it, even if the computer is off. When it's on, use it to find things without the finderscope - just aim using the computer.

But batteries can die. Motors can stop working. Gears can break. Electronics can unexpectedly cease to work. There are many more things that can go wrong when a computer is attached to a telescope.

And setting it up can be its own issue. I have had people come to outreach events I have held where they bring their GoTo telecope and ask me, "How do I set this up?" And I think, "I don't know - I don't have the instructions. What do they say?" And these potential observers of the night sky get frustrated - not with me, but with their telescope.

They can SEE the planets in the sky. They can SEE the Moon. But they can't aim their expensive telescope at the most basic of objects, because they can't even get past the first instruction on aligning it to the sky / location / time / date.

And yet, I think it's more than that.

For me, when I have used GoTo, when it's working well, it's great. Input object, push button, telescope whirrs and buzzes, stops, boom! There's the object. Change eyepieces, perhaps, and observe.

But when it's not, it's frustrating. Even with good alignment - or the thought that the alignment is okay - objects may not always appear as they should in the eyepiece. And then that leads to a problem: The telescope slews around, stops, and awaits your command. You look in the eyepiece and see... well, dots.

Okay... but which dot is the thing I want to see?

And that's where the Neptune issue comes into my mind. Neptune is magnitue 7.6 to 7.8 most of the time. While not super dim, it is not going to blow anyone away with it's brilliance either. And there's no disk really to see becasue the planet never looks larger than about 3 arc seconds from Earth. That is TINY. It is barely large enough to register as a disk in very large telescopes at high magnification. In small telescopes? It's a dot. 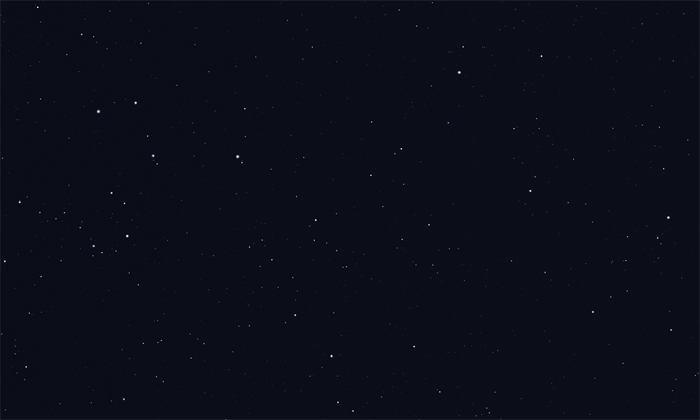 Stellarium star field with planet Neptune in it... but where?

So, your telescope slews you to a part of the sky, and you're looking for an 8th magnitude "star" that's not a star, but a planet, and thinking, "Well, is it there? If so, WHICH DOT is it?"

I think that's where the comment, "Dave, your videos make me want to have a non go-to mount," perhaps came from, at least in part. When you know that you're looking for an "upright vacuum cleaner" or "turtle on a leash" asterism of stars, and Neptune is adjacent to that because there's two parallel sets of stars next to it, you now only know where you're going, you know where you need to be.

Starhopping is the only way that you'll know when you've really arrived. It's like the GPS that tried to send the FedEx truck with my new eyepiece to the opposite site of town. I had to explain where I was, and what landmarks to look for. The truck then arrived 2 minutes later with my eyepiece. The driver knew what to look for and when to stop.

So... all that is to say I am neither suggesting nor implying that GoTo is bad, or your shouldn't use it. It's wonderful when it works. But it won't identify the objects in the sky for you. As such, I'm just saying if you do use it, you should also know how to starhop too. Because if you know what to look for at your destination, you won't be lost when you arrive. And that's the beauty of starhopping - you will not have a puzzled thought such as, "Am I in the right place?"

You will know that you are.

And for those wondering, this is where Neptune is in the graphic above. It's easy when it's pointed out, isn't it? 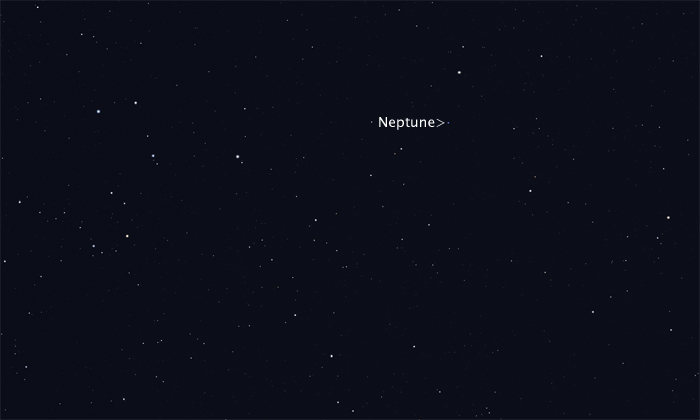