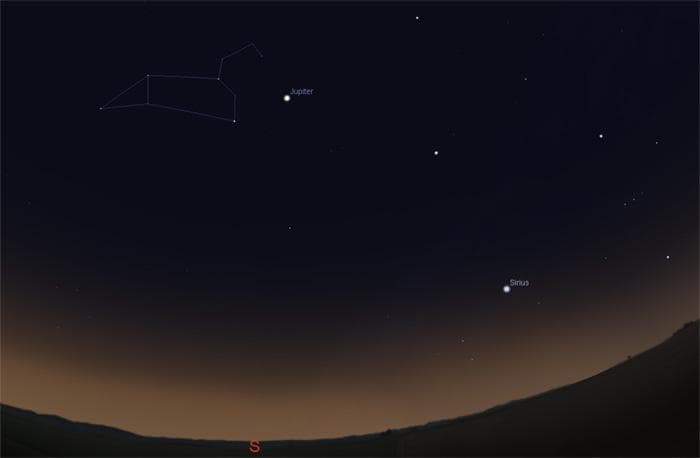 Those of us on Earth won't get a chance to see a triple moon transit across the face of Jupiter for another 17 years... so if it's cloudy, well, you may just have to settle for this animated gif:

Lasting a mere 25 minutes - really a few minutes less than that by the time each Moon is fully into view or before it leaves view - there is not a lot of time to see it. But, there will be plenty of time to view and share this event.

What will you see? In the graphic above, Io is on the left, Callisto is center, and Europa's shadow on the right. If you look several hours earlier in the evening, you can see Io first on the right side of the shadow of Callisto, then racing to catch up, and actually passing it on the left side.

So if clouds thwart your efforts later, or you just plain get tired, you can still at least see a double transit occurring. While not rare, they don't happen all the time.

Where to find Jupiter in the sky

Not sure where to find the large gas giant? Look east, not long after the Sun has set and it gets dark. Jupiter is two weeks from opposition. That's not a political thing where Jupiter is arguing against us! Rather, it is the time when the Sun, Earth and Jupiter are all lined up if viewed from overhead. So Jupiter is "opposite" us in the sky, and rises at sunset, and sets and sunrise.

Therefore, not long after sunset, Jupiter begins its climb from the east. And it will be the brightest object in that part of the sky - just don't mistake it for Sirius, the bright star to the lower left of Orion's belt. You can usually tell the difference between the two, because Sirius will usually twinkle; Jupiter will not.

But the triple transit occurs long after Jupiter has risen; for western Europe, look in the low western sky. For North America, the eastern part of the country should look mostly towards due south. Western states should look somewhat east of due south. Look for Jupiter near the "backwards question mark" of Leo - the planet will be just west of Regulus.

How to observe the transit

Use as much magnification as your telescope and seeing conditions will support. Typically, most telescopes are capable of providing magnification up to 50x per inch (or per 25mm) of apeture. So a 4.5" telescope can provide up to 225x magnification; an 8", 400x. But that's also in an ideal world. That assumes fully cooled optics, perfect "seeing" conditions in the atmosphere, excellent eyepieces, and no "heat islands" generating waviness from air rising from sunlit warmed pavement or houses losing heat through their roofs.

So if you can't max out magnification, push it to the point where you can still focus to a clear, steady image. For many, that may be as low as 150x, but that's okay. Keep looking carefully; the dark shadow spots on the white, bright surface of Jupiter should stand out thanks to the large contrast. More info on how to see the planets better here.

And when to look? For western Europe, the action stars early in the morning, at 6:28 am GMT. For North America, the event begins at 1:28 am EST on Saturday morning the 24th, but in the Mountain and Pacific time zones, it begins on the Friday the 23-rd. Just make sure you don't miss it!

This should be a fun, easy event to see, should have favorable weather. Wishing you clear skies!