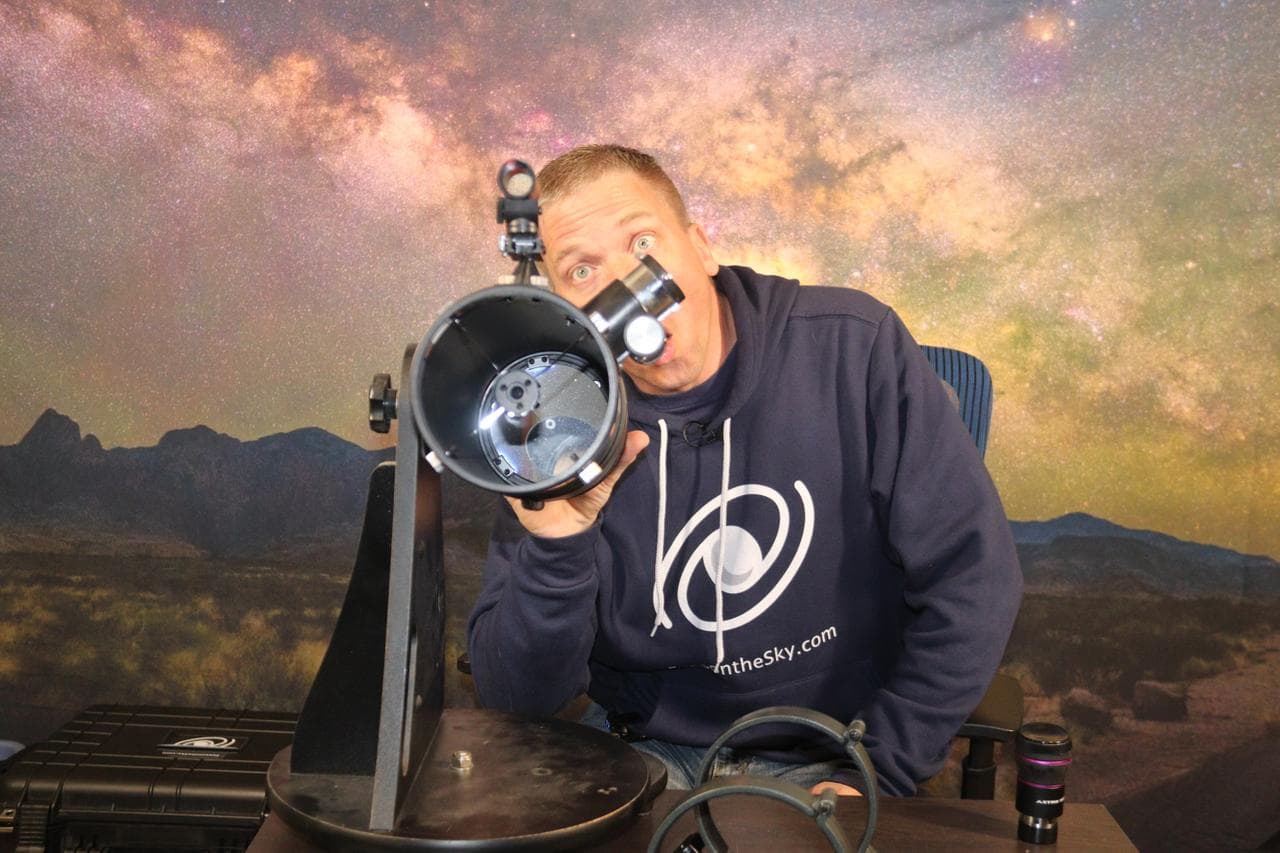 A passionate defense of the tabletop reflector

I think we need a reset on how we look at certain beginner telescopes. I get it, the quick response of "Just get an 8" Dobsonian" is easy. It requires little thought.

But maybe we should ask a couple more questions.

And don't get me wrong: It isn't that an 8" Dobsonian is a bad telescope. They are good. I have both purchased and built quite a few Dobs over the years, from 76mm tabletops to 16" truss tube monsters. 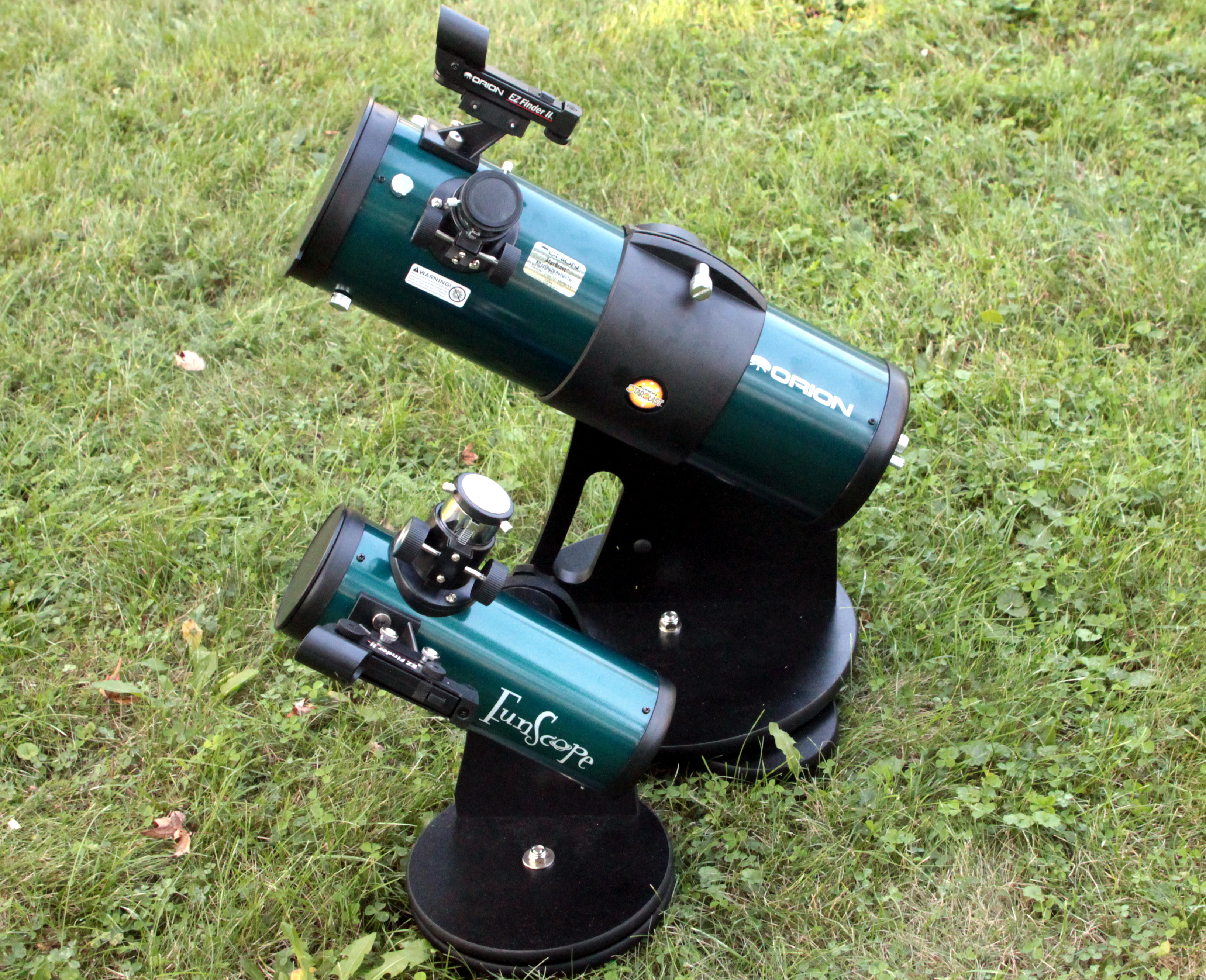 But about those little ones: Remember that not everyone starts in the same place. For that matter, many people have a MUCH lower budget than you. And it's possible they may not even get "bit by the bug" to pursue astronomy. Maybe they don't even WANT to do it every clear night - but they'd like to have a small, capable telescope for when there is a bright comet, or lunar eclipse, or a close conjunction of planets.

Why do they need a 40 lb telescope for that? Oh, and that brings up another point - what about people who cannot lift 40 lbs? Or the 20 lbs of each piece? How about people who live in upper apartments that want to be able to bring down a telescope in one trip?

See, there's a lot of differing factors for people when it comes to their relationship not only with what they may see in the night sky, but how they experience it.

What is the phrase we say over and over in astronomy? "The best telescope is the one you will use, often."

And I know that even though I say, "YES! My 16" telescope is awesome!" I still bring out my 6" telescopes more often. Why?

Experience is a good teacher

But when did that happen for you? AFTER you'd already used a small, rickety refractor with a terrible finderscope and narrow field of view eyepieces that was impossible to aim... right?

Let's remember: Sometimes the best teacher is experience - and failing or being frustrated can be part of that. Though, I concede, we should want to limit the frustrations as much as possible. 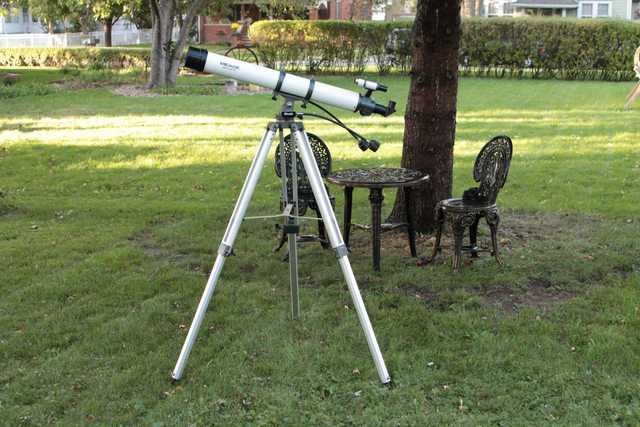 And if our experiences with some of the worst problems of "department store" refractors were the following:

Did we learn from those? I get it - we want to help others avoid ALL of those problems. Every single one.

Except the problem with that is that costs money. One thing I see consistently on Facebook astrophotography groups, for example, is newcomers asking what setup they can get for $1,000. And then I watch commenters say, "You need XYZ $1,500 mount. Never mind a telescope - you need this mount!"

Forget the fact that the mount alone won't let the newcomer do ANYTHING. The commenters are, firstly, ignoring the newcomers budget entirely. Secondly, they aren't providing the newcomer with the experience of using lesser equipment.

And I can't tell you how many people I've seen who have bought that fancy stuff, and then come back after nights of frustration because they cannot for the life of them figure it out.

All of that is along way of getting to my point: It is okay that we suggest lower cost telescope to people getting started in astronomy - provided that they overcome some of the problems of lesser telescopes in the past.

What we do already

Let me begin by asking what we as amateurs often suggest for beginners:

All of these things are why we suggest an 8" Dob, right? So if weight is an issue, or in particular - BUDGET - because people aren't sure if the interest will continue, so they want something to get started - knowing that they may get a better telescope later, then truly, I cannot think of a better telescope than the little 4.5"/114 (or even 5"/'130mm) tabletop telescopes. 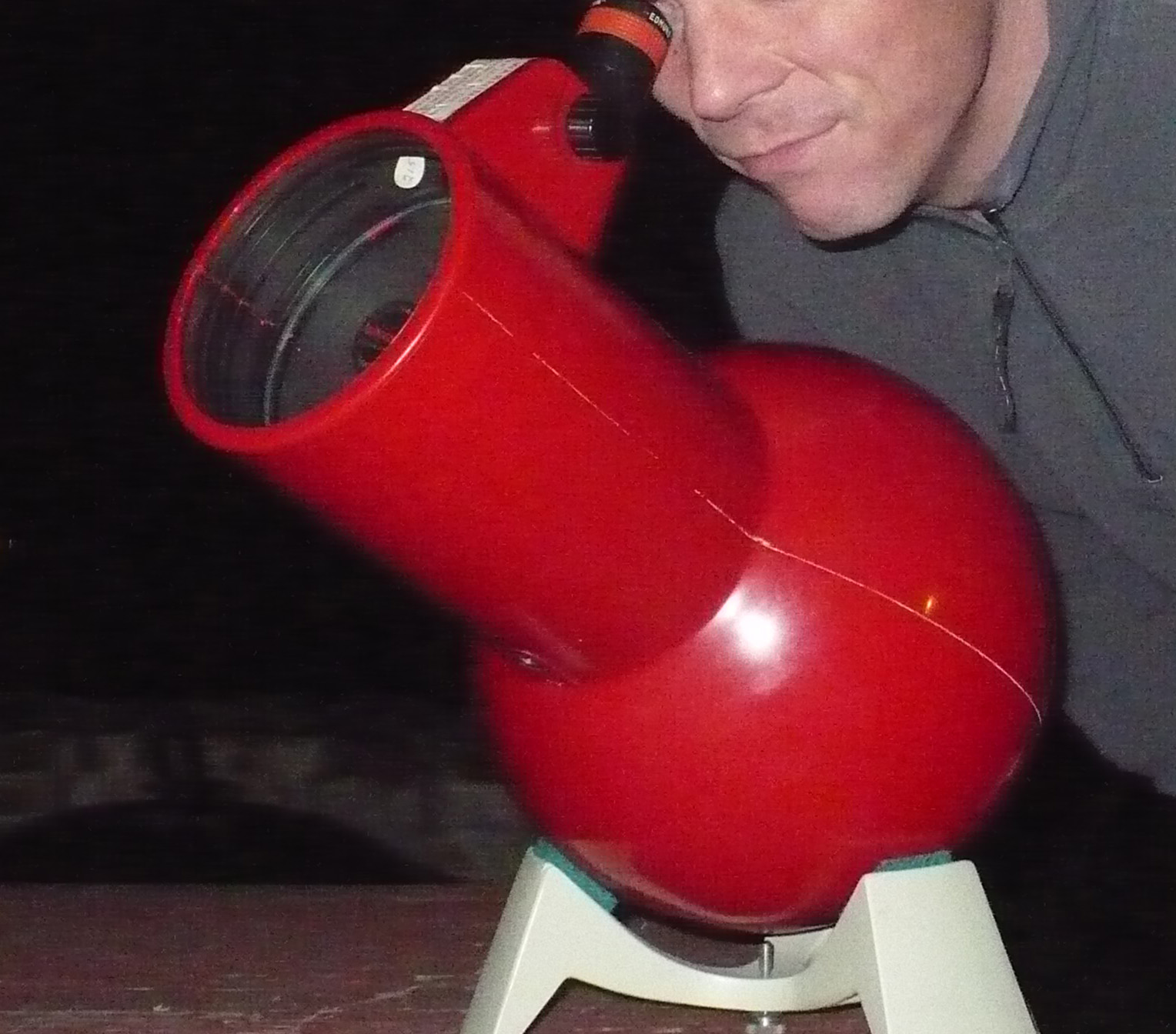 I have had an Edmund Astroscan. But those aren't available anymore. So later on, I got an Orion Starblast - which is less expensive, and perhaps even more useful. Many amateurs who I respect regularly recommend the similar Astronomers Without Borders OneSky (which I believe is just like the Skywatcher Heritage 130p).

These are remarkably capable telescopes. They almost entirely hit all of the points above - yes, even if they have a red dot finder (I even have tutorials beginners can use to find objects with a red dot finder in my "Telescopes On The Sky" list). Heck, the Astroscan only had a "peep" sight!

And did you know that the New Hampshire Astronomical Society has provided over 100 Orion Starblast 4.5 telescopes to libraries in their state? Do you think they did that because these are hard to use and don't show much?

Being clear-eyed about drawbacks - and overcoming them

But let's be realistic: They are not perfect (what telescope is?). So let's talk about the possible drawbacks. The included eyepieces are narrow field of view (these are easily upgraded). Orion Telescopes has lowered the price on their 66 degree Expanse line from $60 to $50 per eyepiece. (I bought my wife a whole set of these). Similar versions are available from other retailers. These are great for attaching a simple cell phone adapter mount to take some first lunar or planetery photos.

Finderscope? Easy to upgrade. Add a 6x30 or 8x40. Or, use the red dot finder because it is as simple as "Put the red dot on the thing you can see in the sky."

And the optical aberration? It amounts to some coma around the edge of the field of view. You know what my 16" f/4 also has?

No really.. who cares? The view in the central portion of what an observer sees is clear and focused. Can the same be said of chromatic aberration with cheap refractors? Do those same cheap refractors come on rickety tripods with tiny bearing surfaces and awful 5x24 finderscopes?

So which is better? I'd argue a small tabletop Dobsonian reflector.

It's practically a mini-version of an 8" Dob

Okay, to be fair, these 4.5" / 114mm telescopes DO require a bit of mechanical maintenance. They do need occasional collimation. If they are off, the view will be pretty bad. Can we overcome that with most people? Probably. Or... suggest a 4.5" f/8 Dob instead. WAY more forgiving of collimation, and still pretty small and lightweight (18 lbs total). And an 8" Dob needs collimation too!

So if aperture rules, isn't a 4.5" telescope going to outperform a 70mm or 80mm "short tube" achromat almost every day of the week?

Wait... right. These are TABLE top telescopes. Yes, that means one needs a stable table. Or... a tripod for about $40. 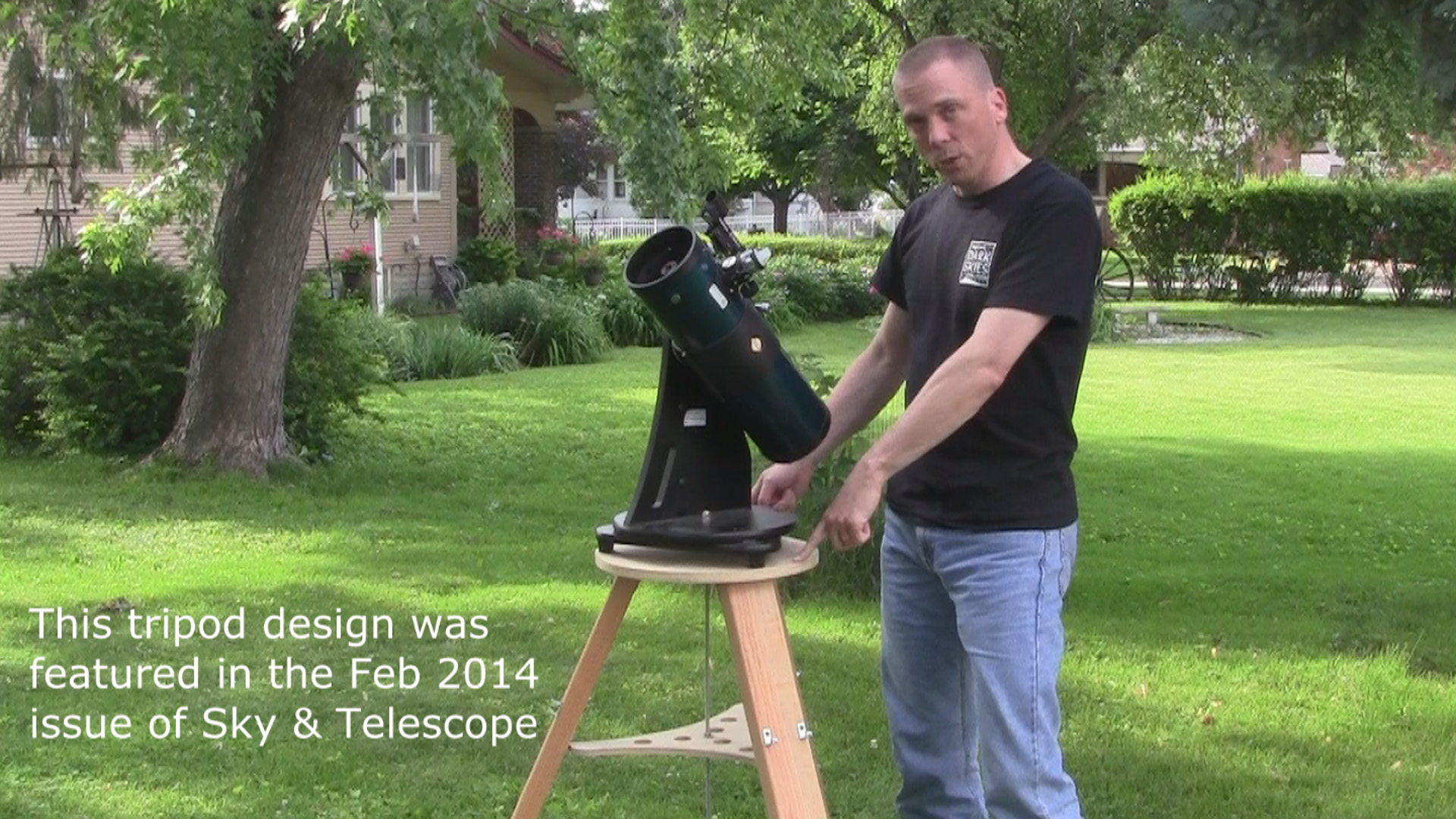 To be sure, magnification is an issue with shorter focal length. Two options there: Barlow lens or something like an AstroTech Paradigm 3.2mm eyepiece to get up to 140x magnification.

So what am I missing? These are basically a mini 8" Dobsonian - for about half the cost, and FAR less weight/bulk to move/store.

Can we all just be okay with recommending a smaller telescope that can be a way to get experience while still having enough aperture to show the heavens even through light pollution that is stable, easy to use, and importantly, both large enough AND small enough people will use regularly?

Still not convinced? Maybe the video below will help. But remember if you're suggesting "Get an 8" Dob" but not taking into account weight and price, you may be doing the new potential observer a disservice. What if their 8" winds up in the garage and never used because it's too heavy/bulky?

That's on you, then.

Take the time to learn what people want, and can afford. It matters if we want more people out there as celestial sightseers.