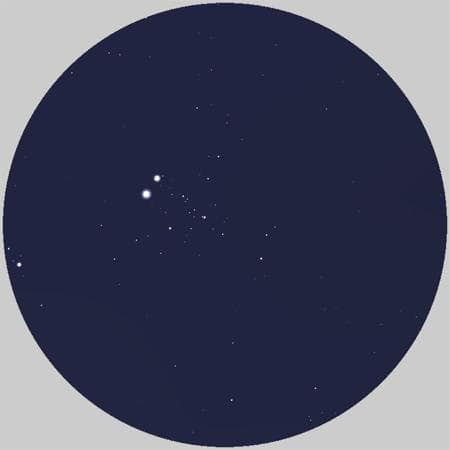 A detailed guide to finding / observing the open cluster

TOTS #3 is a detailed written and video reference to finding and observing the open cluster NGC 457 in the constellation of Cassiopeia. This guide is ideal for beginners, but many advanced amateur astronomers may find it useful. Note that NGC 457 is sometimes known as the "E.T. Cluster" due to its resemblance to the 1980's movie character. It is alternately known as the "Dragonfly Cluster" or "Owl Cluster" as the shape can resemble a dragonfly or owl with outstretched wings. This guide will help you locate this open cluster whether your telescopes has a magnified finderscope or a red dot finder.

NGC 457 is an open cluster within our own Milky Way galaxy. It is over 7,900 light years from Earth, so the photons from it reaching your eye in a telescope left that cluster about the time copper was first being used in the Middle East. The estimated age is about 21 million years, making it one of the younger star clusters in our galaxy. Here is how to locate it.

NGC 457 is called the "E.T." or "Owl" cluster for good reason: There appear to be two prominent "eyes" of 5th and 7th magnitude stars and then a fainter body with arms - or wings - outstretched. So imagine E.T. like this (except with it's arms outstretched on either side) or an owl like this, and you have some idea of what to expect at the eyepiece.

The most notable thing to look for is the "eyes" though. One will appear slightly blue; this is a B-class star over 13,600 light years away. The other to me appears somewhat yellow-ish in comparison, even though it is a more pure-white F-class star more than 2 times as far away at 13,000 light years. Neither of these belong to the cluster at 8,000 light years distance. It is located between us and these two much-further stars. This cluster with these "eyes" is truly a chance line-of-sight phenomenon. In a magnified finder, the "eyes" are easy to see when searching for the object; given it's overall size at 13 arc minutes, beginning with a lower magnification that yields 1 degree or more is a good idea.

Photographs show much more of night sky objects because they can capture more photons for longer periods of time. As such, sketches of deep sky objects are perhaps one of the better ways to see what you might expect to observe at the eyepiece, because it is a rendering of what another observer's view was. This sketch is by Tom Corstjens, from a 279mm (11") telescope. While larger than many beginner telescopes, it provides a good idea of what may be visible under darker skies or with equipment 150mm/6" or larger too. 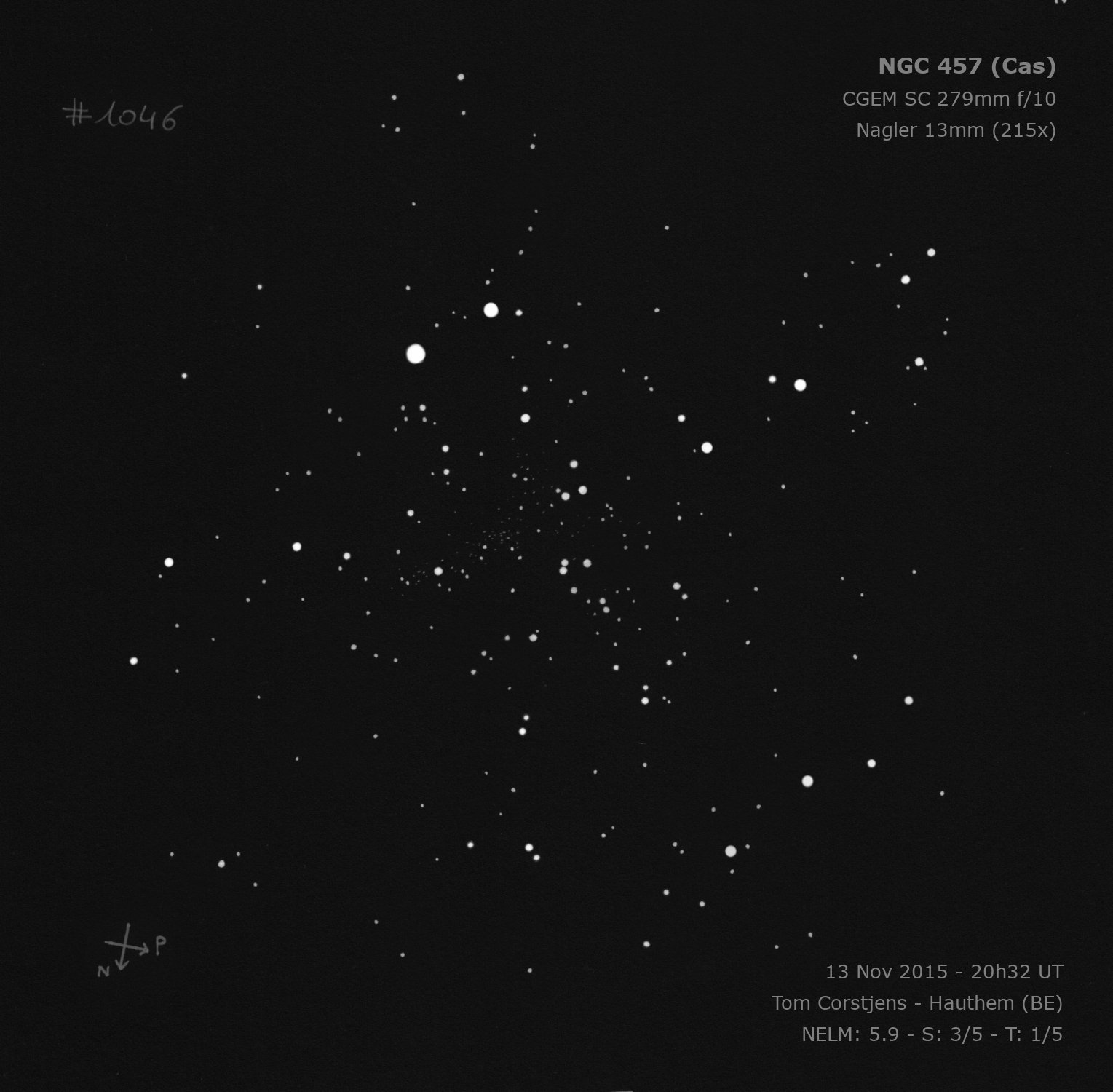 Sketch by Tom Corstjens. Used with permission and via the Creative Commons Attribution-NonCommercial 4.0 International license. To see more of his sketches, follow Tom on Twitter.

Here's some links to some other sketches of this object.

Because telescopes and observers are all different, here are some alternate sketched/drawn views of NGC 457:

Below is an approximate view of NGC 457 as seen with at 60x magnification with a 0.90 degree field of view. Note that depending on the orientation of Cassiopeia in the sky, and your telescope's mirrors, the view may be significantly rotated or even upside down compared to what is shown here. Most of the stars are high 10th to low 12-th magnitude, meaning most are similarly bright at the eyepiece, and also visible in most any telescope under most sky conditions.

Graphic demonstrates how view would look with objects on the meridian using a refractor telescope and a star diagonal.  Other telescopes or object sky positions may incur a differing view.  Various magnifications, eyepieces, telescope focal lengths and other variables may alter the view compared to this one.  This is a representation only intended to help the observer get some idea what they may see at the eyepiece.  Extreme local light pollution may block the view entirely. 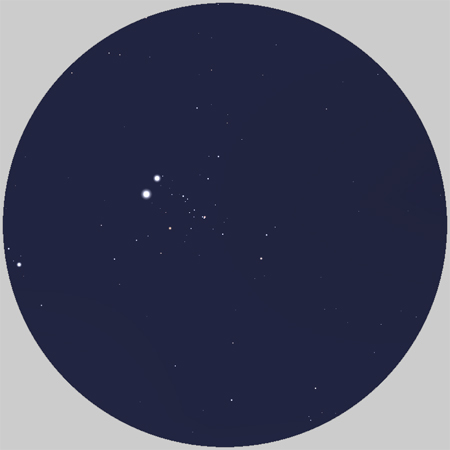 Here are some other nearby Telescopes On The Sky objects you can find and observe with any small telescope: