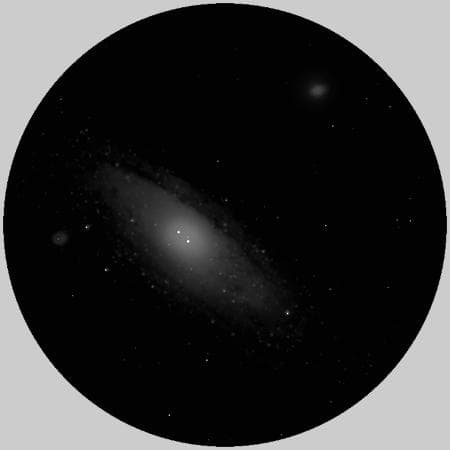 A detailed guide to finding / observing two galaxies in Andromeda

TOTS #1 is both detailed written and video references to finding and observing the galaxies Messier 31 and Messier 32 in the constellation of Andromeda. These guides are ideal for beginners, but many advanced amateur astronomers may find these useful. M31 is sometimes known as The Great Andromeda Galaxy. This tutorial will help you locate these two galaxies whether you have a magnified finderscope or a red dot finder.

Find Messier 31 in the sky

Messier 31 is the closest spiral galaxy to our own Milky Way galaxy. It is over 2 million light years away, so the photons reaching your eye in a telescope tonight left that galaxy some 2+ million years ago, just before the time of homo erectus. The Andromeda galaxy is on a collision course with our own, and the two will merge in about 4 billion years.

How to find and observe dwarf galaxy Messier 32

Messier 32 is an elliptical galaxy also visible near Messier 31. Long thought to be a small satellite galaxy of M31, new studies suggest that M32 may be the remnants of a spiral galaxy that had its outer stars stripped away by the larger M31. Either way, it has a burst of stars forming in the central region; this is why M32 is so bright making it easy for us to see.

To find M32, locate M31 using the video above. The dwarf galaxy is typically within the same wide-field eyepiece view with the core of Messier 31. Look for a "fuzzy star" near to the core that seems out of focus. That's M32!

Observing tips for Messier 31 and Messier 32

Use VERY low power initially. If you do not see the galaxies, slowly scan the area with the slow motion controls. The movement may help you make out the round or oval shaped glow of the brighter one, Messier 31.

Many people describe it as a "faint cotton ball" at the eyepiece. You will NOT see the entire galaxy; from most areas, only the bright, central core is visible. Darker skies away from light pollution and ideally larger apertures (and maybe some observing experience!) are required to see the "arms" and dust lanes of this galaxy. Seeing the core is actually seeing a lot!

Messier 32 will look small and like a fuzzy star, but there are enough other stars in the region that it will be difficult to mistake having the telescope out of focus. Also try using averted vision, or tap the telescope tube lightly to activate the rods in your peripheral vision, which are more sensitive to low lighting levels. I have more tips for seeing deep sky objects better here.

Useful filter(s): Broadband light pollution filter, perhaps, in smaller telescopes. Narrowband may be useful in larger instruments. Note that galaxies emit light in all spectrum, so the only benefit to either filter is to improve perceived contrast by darkening sky background. It will not make the galaxy itself brighter by comparison.

Because telescopes and observers are all different, here are some alternate sketched/drawn views of Messier 31 and Messier 32:

Below is an approximate view of Messier 31 and Messier 32 as rendered by Stellarium in a 1 degree field of view. Note how M32 may be outside the field of view if the core is not centered.  Demonstrates how view would look with object using a reflector telescope. Other telescopes, telescope or star diagonal rotations or object sky positions may cause a differing view.  Various magnifications, eyepieces, telescope focal lengths and especially local light pollution and dark adaptation along with other variables may alter the view compared to this one. Extreme local light pollution may block the view entirely. You can get some idea of what this object will look like by clicking on the sketch links below.

More about the constellation this object is in:

Associated asterisms: One star forms the fourth point in the "Great Square of Pegasus"

Relative size: 19 out of 88 (Camelopardalis is next larger, Puppis is next smaller)

Telescopes On The Sky objects that can be found in this constellation: Messier 31/Messier 32, Almach (Gamma Andromedae)

Brightest stars in Andromeda, by magnitude