How to find and observe Eta Cas (TOTS#2)

A detailed guide to finding / observing the double star

TOTS #2 is a detailed written and video reference to finding and observing the double star Eta Cassiopeiae in the constellation of Cassiopeia. This guide is ideal for beginners, but many advanced amateur astronomers may find it useful to help locate this double star with almost any telescope set up. This tutorial will help you locate these two galaxies whether you have a magnified finderscope or a red dot finder.

Find Eta Cas in the sky

Eta Cas is a double star within our own Milky Way galaxy. It is quite close to Earth, at just 19.4 light years, so the photons reaching your eye from the star tonight are under 20 years old. What makes Eta Cassiopeiae so interesting is that the primary star is a G-class star much like our Sun. Our Sun would look similar from Eta Cas if we were peering back it it from there. It also has 97% of the mass, and is 101% of the radius of our Sun. It is much like a twin of our host star in many respects, though it is likely about a billion years older. Here is how to locate it.

Eta Cassiopeiae isn't too difficult to find (see video above). The challenge is that for smaller telescopes, the difference in magnitude between the two stars is 4 magnitudes, so the dimmer star can take a little bit of patience to spy. But once centered, the split isn't difficult. However, it will look better in a medium magnification view.

The key is to look for the color difference. While the primary is a G-class star very similar to, and not much larger than, our Sun, the secondary is a K-class star. But being much dimmer, the color contrast looks much stronger to some observers. According to Robert Burnham's "Celestial Handbook," some see gold/purple, yellow/red, or even topaz/garnet.

What do you see?

Because telescopes and observers are all different, here are some alternate sketched/drawn views of Eta Cassiopeiae:

Below is an approximate view of Eta Cassiopeiae as seen with a 70mm telescope at 150x magnification, and a 0.35 degree telescopic field of view.

Demonstrates how view would look with objects on the meridian using a refractor telescope and a star diagonal. Other telescopes or object sky positions may incur a differing view. Various magnifications, eyepieces, telescope focal lengths and other variables may alter the view compared to this one. This is a representation only intended to help the observer get some idea what they may see at the eyepiece.  Extreme local light pollution may block the view entirely. 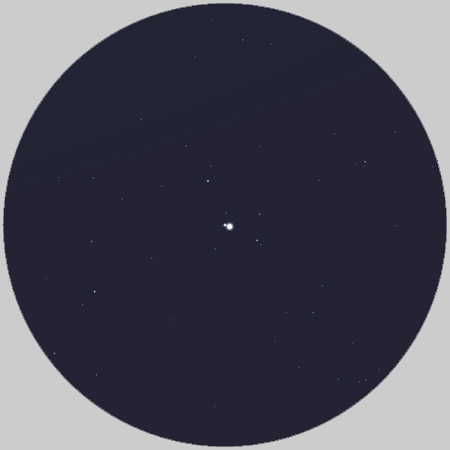