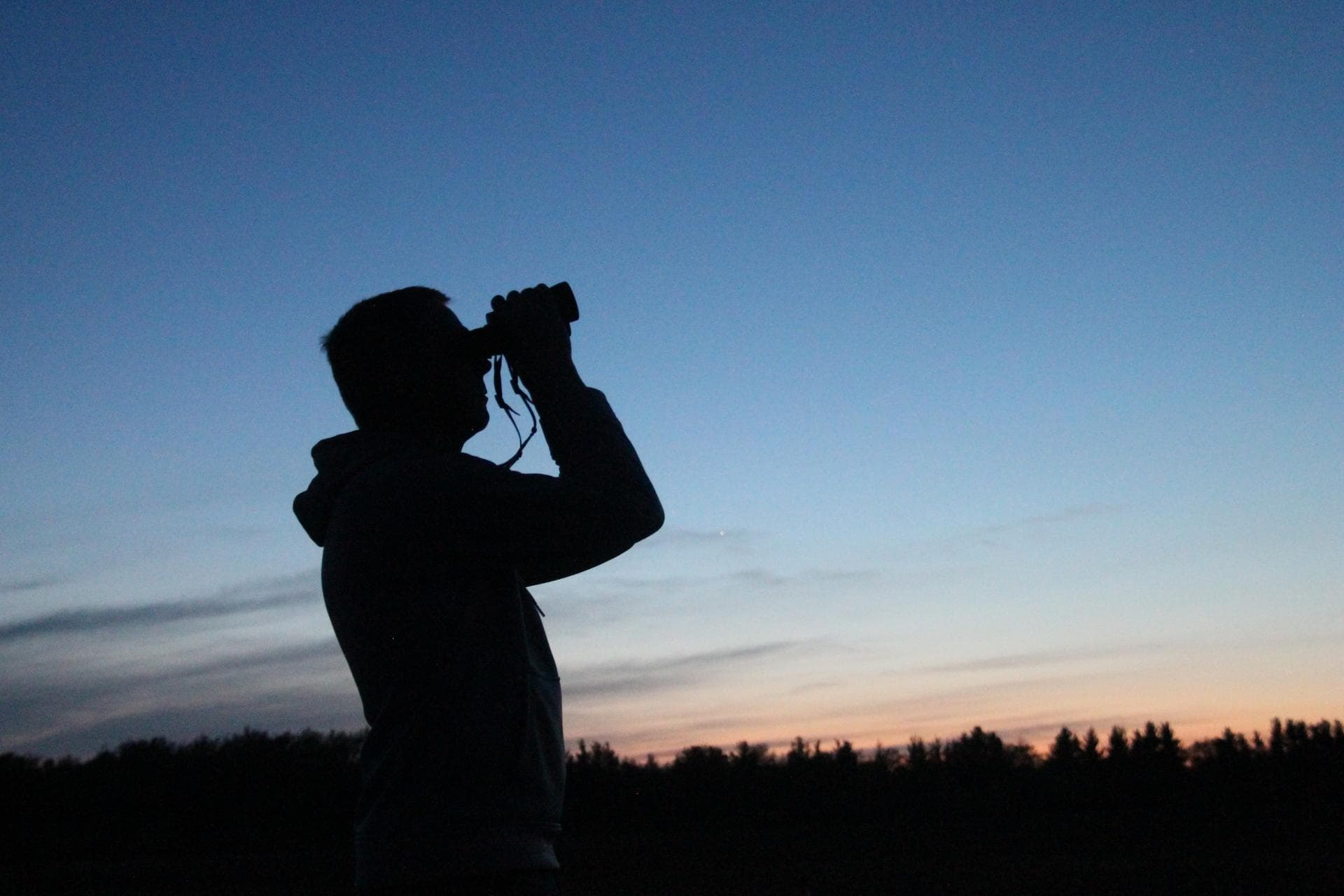 How to Choose the Best Binoculars for Astronomy Observing

Binoculars seem to be everywhere today.  Miniature, pocket-binocs can be had for $15 or $20, which is an astonishing price point when you stop to consider how many lenses and prisms are in them.  And though these may be perfectly acceptable for quick views of the occasional bird or squirrels, the sheer physics of their limited light gathering make them impractical for usage in astronomy.

That leads to the flip side the binocular world: The large aperture, high magnification ones.  These seem like a great idea as well: 60 and 70 millimeter lenses with 15, 20 and 25 times magnification.  We need more light through the lenses to see more, and higher magnification is always a good thing, right?  Well... yes and no.  Good, high-quality, anti-reflection coated lenses, BAK-4 prisms, expertly-collimated binoculars make great, specialty astronomy binoculars, but observers with instruments such as these will also need a beefy, strong tripod, because their weight will make them heavy to hold even after short periods of time, and the magnification will require it.  Go the other route of cheaper lenses, less coatings, BK-7 prisms, poorly collimated optics and you have a recipe for difficult to focus binoculars with soft / fuzzy star images out the outer edge of the field, vignetting of the field of view, and an instrument that may make your eyes / head hurt!  Yes, they are inexpensive (sometimes as low as $60), but is that really worth it?

What to look for in astronomy binoculars 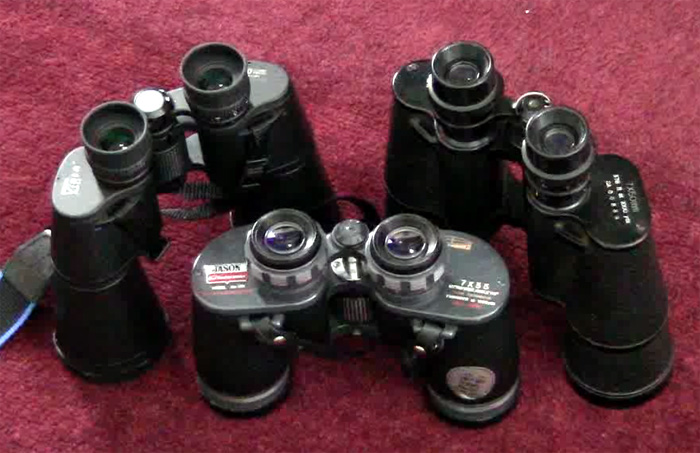 First, let's talk numbers.  Binoculars are described using two numbers, usually in a "X x XX" format.  The first number is the magnification provided by the binoculars.  The second number is the aperture of the main lenses (the side the light comes in) in millimeters.  So 7x50 binoculars magnify 7 times, and have two lenses of 50mm on the incoming light end.

Magnification is less important for astronomy than many beginners realize.  In fact, for binoculars, less magnification is better, since very likely the instruments will be hand-held.  The more magnification there is, the more any inability to hold the binoculars perfectly steady gets magnified too.  That's why many ideal astronomy binoculars are 7x50, 8x40 or 10x50.

The other number, aperture, matters in the same way it does for telescopes: Larger aperture gathers more light, which means the observer can (likely) see more.  With binoculars, that is true too  - but again, up to a point when all other factors are taken into consideration like weight, coatings and cost.  Very often, that good balance will start with 35mm lenses, and top out around 50mm lenses.  Again, you can see why 7x50's and 10x50's are popular choices.

You can calculate an important component of ANY set of binoculars called exit pupil.  This is the diameter of focused light leaving the eyepiece end of the binoculars.  It is roughly calculated by dividing the aperture by the magnification:

Why is that important?  During the day, it isn't, as there is sufficient light gathering and very likely the pupils of your eyes will be constricted anyway.  This is why those small, pocket binoculars are often useful during the day.

But at night, the pupils of your eyes enlarge, helping you to see better.  If you are using small, 10x25 binoculars, the exit pupil will only be 2.5mm.  Younger people's eyes can often dilate to 7mm, and those 40 and older may only dilate to 5 or 6mm, but think about that: If you're only getting 2.5mm of light, you're restricting what you can see.

Having a larger exit pupil matters; don't restrict what can reach your eye for binoculars (this is different for telescopes at high magnification) artificially based on small exit pupil numbers.  The idea is to gather more light for your eyes, so you can see fainter stars and objects in the night sky. 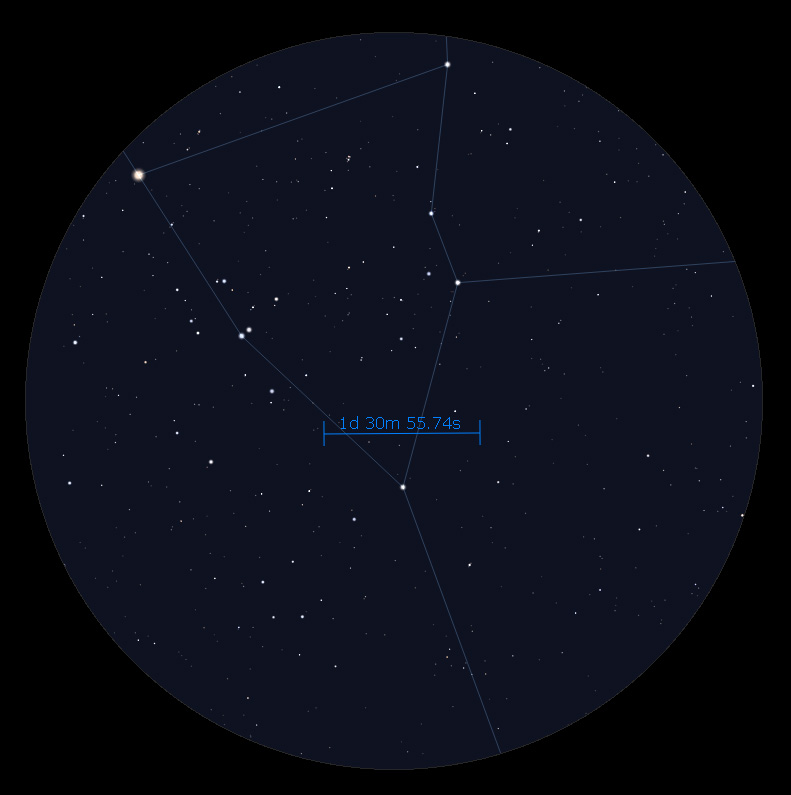 In astronomy, it helps to know how wide the field of view is that is visible in binoculars.  5 to 7 degrees of field is really where binoculars excel over telescopes, which can restrict the field of view to a degree and a half or less (see graphic above).

It's similar to the "zoom" function on a camera: If you're trying to get a picture of your whole family at a holiday, that might be difficult if the camera's zoom is stuck halfway or all the way on zoom.  You'd need the widest view possible, so you'd zoom out.

That's what binoculars do.  Higher magnification binoculars start to restrict this field, often pinching it down to 3 and 4 degrees.  That is still better than most telescopes, but the benefit of binoculars is having that widest field of view, to find objects in the sky more easily or simply take in a larger view of the cosmos than can be seen naked eye.

Separating the wheat from the chaff

So why so much?  Well, remember all that glass in there.  Have you ever checked your hair in a car window or piece of glass on a building?  Glass reflects some light.  And every SIDE of that glass reflect a bit; so one piece of glass has two surfaces that are reflecting light back - that's why you can sometimes see two images of yourself in a window.

Binoculars may have 12 to 16 of these surfaces PER SIDE. That's a lot of glass surfaces to reflect light!

These are certainly acceptable.  Lower cost binoculars may say, "coated" lenses, and only coat the outside lens surfaces.  It really helps to read the sales literature carefully, and trust me - marketing people will do all they can to get you to think that more surfaces are coated than perhaps are.  You can get a good idea by the difference in prices.

The weight of binoculars is another important component to consider.  It gets tiring holding binoculars that weigh more than about 2 pounds (32 ounces / ~1kg).  The flip side of this is making sure that the instrument has enough metal in it to hold collimation and protect it from occasional bumps; too lightweight and the slightest mishandling could knock it out of alignment.  Something in the 24 to 30 ounce range for 7x50 or 10x50 binoculars is likely to be ideal.

Binoculars are compact because they use internal prisms to bounce the light path and "fold" it into a smaller package.  There are two ways to do this: One is with 'roof' prisms, often used on those pocket / compact binoculars.  Roof prisms aren't very practical above about 40mm in diameter, so starting around 35mm aperture companies employ something call porro prisms.  These allow more light to enter them from the main lenses, although there are differences in the type of glass used.

Lower cost binoculars use BK-7 glass.  It is less expensive to manufacture, but it does not transmit as much light.  And if they are not coated, they'll transmit even less!  Better binoculars use BAK-4 prisms, a more expensive type of glass which transmits more light.

Better binoculars also use larger BAK-4 prisms, to avoid vignetting the light coming from the main lenses.  The idea of astronomy binoculars is ti have as much light possible reach your eye - cutting it off artificially because the prisms are too small reduces how much you can see.

Knowing all that goes into binoculars, determine a realistic budget.  With essentially TWO optical systems in one instrument, remember that it is like joining two small telescopes together - AND - they need to be well-collimated with each other, or you'll be seeing double (or straining your eyes to 'merge' the two images, which can cause a headache!).

And there's more than just those two lenses; there's another set of lenses where the eyepieces are - usually consisting of three elements per side.  Add to that the two sets of prisms.   $75 to $100 is really the very low end of decent binoculars.  "Good" binoculars start in the $200 to $300 range (yes, I know that is as much as or more than many telescopes).

To zoom or not to zoom?

Definitely not.  Seems like a great idea.  Terrible for astronomy.  Trust me, you'll be wasting your money.  Same for any binoculars labelled "focus-free" ones.  Save for something better and more suitable.  Pinpoint stars are the hardest thing for optics to focus; zoom and "focus free" make it that much harder, and the results aren't pretty.  Avoid these.

TL;DR (Too long; didn't read everything above) a.k.., Bottom line

To sum up: Binoculars for astronomy are best when they provide a low magnification, wide field of view.  In addition to providing a substantial exit pupil of light leaving the eyepiece, when chosen at a weight of two pounds or less with fully coated surfaces, they can provide substantially more light reaching the user's eyes and assist in observing wide fields of much fainter objects than the naked eye can see.

For those reasons, 7x50, 8x40 and 10x50 binoculars are often the best compromise of features and price for astronomy binocular users.  Choose some with fully multi-coated or fully coated optics for best performance.  As tempting as those 15x70, 20x80 or 25x100 binoculars may look compared to the price, they will very likely still be around to serve as a second set of specialty binoculars for astronomy.  Learning the sky will be substantially easier with the lower-power, lighter weight options listed previously.

The very best binoculars will come from Canon, Leica, Minolta, Nikon, Pentax, Steiner, Swarovski, and Zeiss, but these are likely to be in the $300 to $500 range and up.  For more budget-minded optics, consider the binoculars sold at Orion Telescopes and Astronomics, though I would be careful about the large, lower-cost Celestron binoculars as the reviews have been quite mixed on these instruments.

I personally own 7x50 Scenix binoculars from Orion; they run about $100 (sometimes on sale for a bit less). I bought my wife a set of the 8x56 Mini Giants from Orion - while these are on the upper end of weight for hand holding, they provide pinpoint stars and lovely views across the entire field. While I own about a dozen pairs of binoculars, these two are my most used ones.

Low magnification (7x and 8x) and easily hand-held. I hope you'll believe me when I state that there's a reason why you might want to consider something along those lines for your first pair, too.