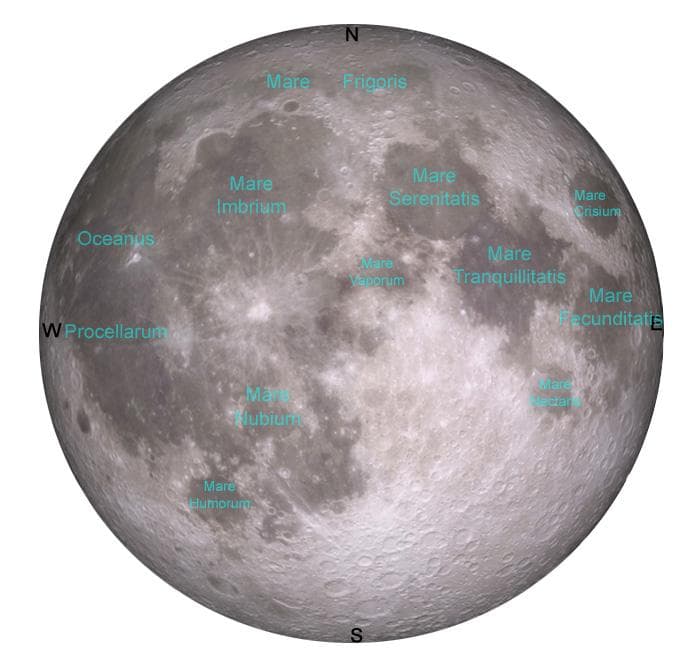 A beginners guide to visible lunar features on the Moon.

Or download the free 50 FEATURES color coded guide to the Full Moon here.  Set printer to "Highest Quality" in order to retain the maximum visibility of features.

BONUS! Ever seen the Lunar X or Y features?

The Moon is one of the easiest objects in the night sky to observe, because of both its distance and size.  The planets Mars and Mercury, for example, are not much larger than our Moon's 2160 miles (3500 km) average diameter, but orbit the Sun much further from us so studying them with a telescope is more difficult.  Not so with our natural satellite!  First, let's take a look at the major features of the Moon - the maria, highlands, and phases.

Pronounced "MAR-ee-uh" (or "MAR-ay" for the singular mare) these are the darker sections visible on the Moons surface.  The word comes from the Latin word for "seas," as ancient astronomers viewed these areas as basins perhaps containing water.  Though they did not contain water, they are lower areas on the Moon caused by large impacts which later filled with lava, long since cooled.  They are darker due to an iron-rich content, and have lower albedo - or proportion of reflected light.  Let's look at the major maria below. 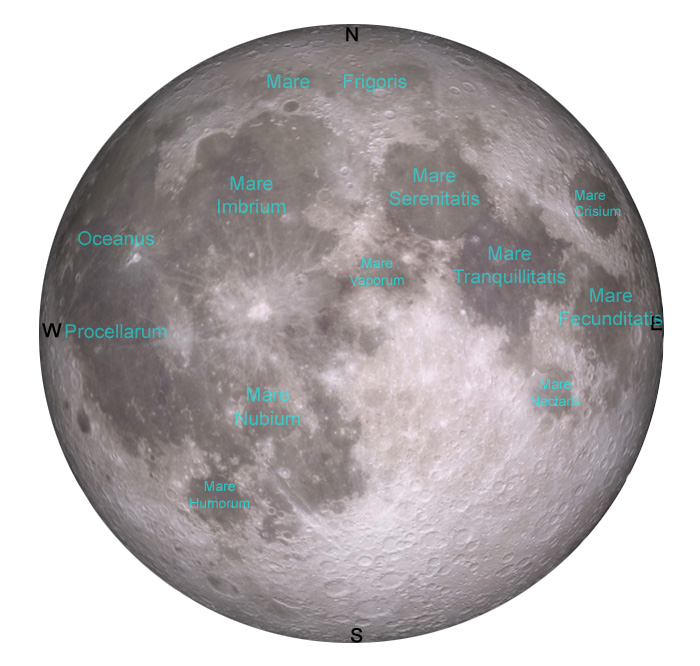 On the map shown at right, the maria are listed in blue, indicating the major areas of interest.  There are other "water" features on the Moon, but it helps to get acquainted with the most prominent features first.  Using binoculars, each of these is clearly visible.  Mare Frigoris (Sea of Cold) extends across the northern section of the Moon; it is sort of a long and thing mare that caps off the northern tier.  On the west side of the Moon is Oceanus Procellarum (Ocean of Storms), the largest "dark" feature on it's surface, reaching approximately 2,500 km (1,600 mi) from north to south, and covering 4,000,000 km2 (1,500,000 sq mi)!

Beyond the southern edge of it and to the south of Mare Nubium (Sea of Clouds) is the comparatively small Mare Humorum (Sea of Moisture - is there any other kind?).  On the other side of the brightly rayed crater Copernicus on the northern edge of Mare Nubium is Mare Imbrium (Sea of Showers/Rain), which is partially encircled with the few mountain ranges on the side of the Moon facing Earth.  One may split the interceding mountains and highlands to get to the east side of the Moon via the also small Mare Vaporum (Sea of Vapors), which will lead the observer into the much larger Mare Serenitatis (Sea of Serenity).

Continuing the eastward journey will place the viewer at Mare Tranquillitatis (Sea of Tranquility), terminating near the Moon's limb at Mare Fecunditatis (Sea of Fertility).  These two larger mare split off the medium sized Mare Crisium (Sea of Crisis) that hugs the northeastern limb, and Mare Nectaris (Sea of Nectar) rounds out the tour below some highlands near the southern edge of the two larger, eastern maria.

But there is more to the Moon than just the dark areas; the lighter sections not only harbor many of the older craters on the surface, but these are also the higher elevation areas. Brighter in albedo but rugged in topography, let's explore these areas which are often overlooked compared to the more well-known maria. 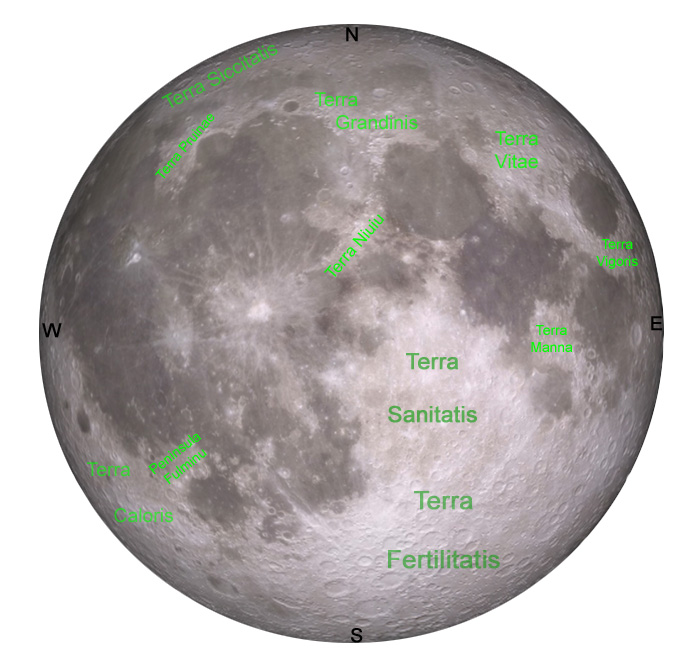 The highland areas of the Moon are wonderful areas of the Moon to view, due to the incredible craters and mountains contained in them.  At lunar phases less than full, these areas offer stark relief where the sunlight and shadow combine to reveal fascinating detail that visible changes over time as the observer watches!

Though not often referred to by their "terra" names, it is nonetheless an interesting set of features to learn.  Terra Siccitatis (Land of Dryness) rises along the northwestern edge of the Moon.  Just to the south, the small peninsula jutting into Oceanus Procellarum and Mare Imbrium is Terra Pruinae (Land of Frost).  In what seems to be a nod towards what may have been viewed as a balmy section of lunar surface, Terra Caloris (Land of Heat) hugs the southwestern edge of the Moon, and Peninsula Fulminu stretches into, and splits, Oceanus Procellarum and Mare Humorum, with Mare Nubium touching the tip.  Terra Fertilitatis and Terra Sanitatis (Lands of Fertility and Health) cover almost the entirety of the southeastern region of the landscape, with only the Terra Manna (Land of Manna) jutting into some of the eastern maria to shake things up a bit.

The northern tier contains more labelled areas, as Terra Vigoris (The Land of Cheerfulness) extends from the eastern edge towards the large and more prominent Terra Vitae (Land of Liveliness) in the northeastern region.  Sandwiched between Maria Frigoris, Imbrium and Serenitatis is the Terra Grandinis (Land of Hail), which must have been thought of as being a wet area - or at least one with violent storms!  And lastly, below it and near the equatorial region is the ironically named Terra Niuiu (Land of Snows), though with the mountain ranges in the area, perhaps the name is apt after all.  NOTE: The highland areas are rarely referred to by their names, and most observers simply note the crater of which they are speaking.  Therefore, the highland areas have bee left off of the free PDF lunar map (4.6MB).

Craters on the Moon are some of the most fascinating features to view, and many of them are large enough to be seen even with binoculars!  The largest and/or brightest ones are listed here, as at full Moon phase, many craters and mountain ranges can be difficult to pick out of the glare. 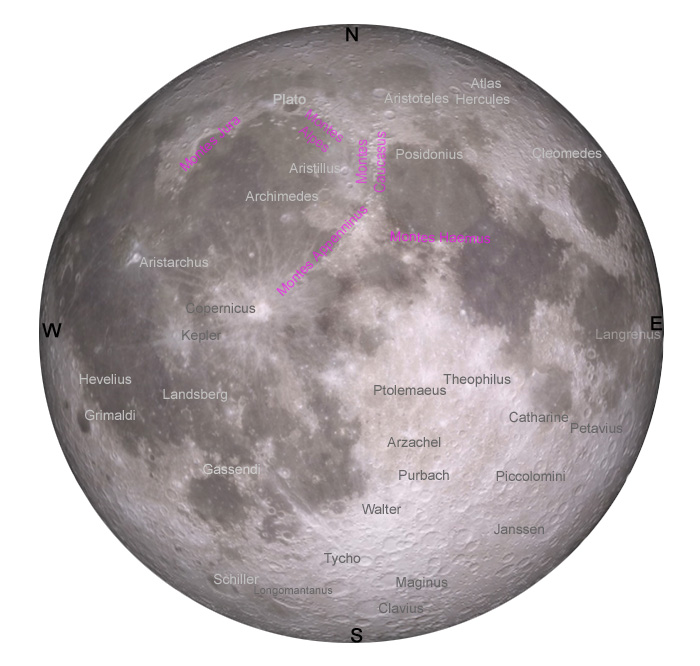 The most obvious features on the lunar surface during Full Moon are the bright craters Copernicus middle-west and Tycho south-center.  The bright rays formed from the ejecta that sprayed across the Moon from the massive impacts are unmistakable.  In the case of Copernicus, a young crater of about 800 millions years age, the rays extend nearly 1/4 of the way across the diamater, about 500 miles (800 km).  to the south of Copernicus are Landsberg and Gassendi.  For Tycho - a very young crater at just 108 million years old - they stretch up to 900 miles (1500 km)!

There are some very large craters in the Terra Fertilitatis region, with Clavius being a well-known one, and Maginus, Longomantanus and Schiller some of the largest there, and several of these are great to view around First Quarter Moon, along with Walter, Purbach, Arzachel and Ptolemaeus.

To the east, the large Janssen, smaller but fascinating Piccolomini and Catherine are favorite target during a waxing crescent Moon.  More towards the eastern limb, Petavius and Langrenus are good to view just after the Moon is full, as the terminator shadow crosses them couple of days after that time.

To the north, Cleomdedes, Atlas and Hercules are well-suited to early crescents or waning gibbous Moons, while Posidonius will require a slightly longer wait.  Aristoteles and the Montes Caucasus mountain range are perfect for First and Last Quarter viewing.

During waxing gibbous or waning crescent phases, look for Montes Appeninus and Montes Alpes, or the light craters Aristillus and Archimedes, or the dark-floored Plato on the northern edge of Mare Imbrium.  On the waxing gibbous or waning crescent terminator, from north to south look for Montes Jura, Aristarchus (which will likely not look as bright), Hevelius, the dark-floor of Grimaldi or the massive crater Schiller.

Want to see all those features all together?  Click here to go to the complete Full Moon map page.

Or download the free full featured, color coded guide to the Full Moon here.  Set printer to "Highest Quality" in order to retain the maximum visibility of features.