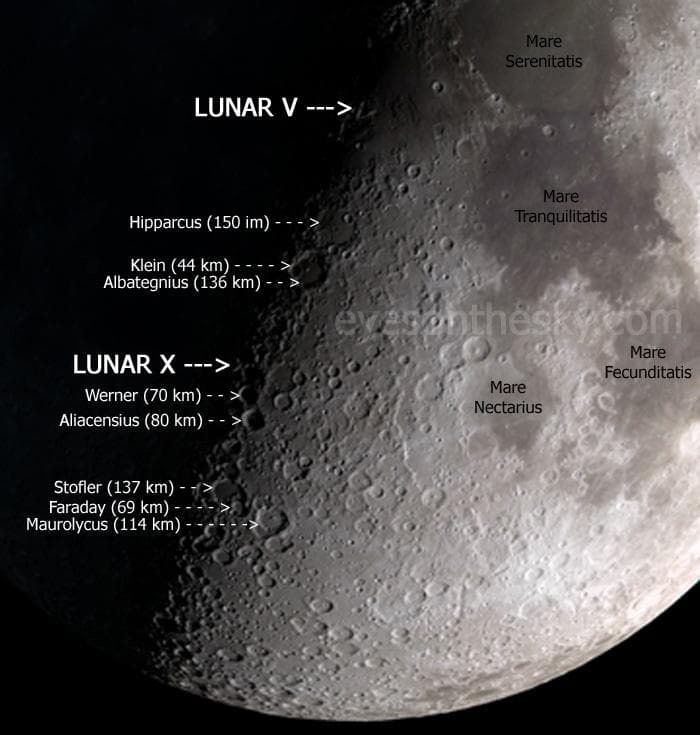 Find and observe the Lunar X on the Moon

The Lunar "X" is a transient optical feature of the Moon that occurs for about 4 hours near First Quarter phase of the Moon. Because the Earth is not always in the same place when the Moon is in this ideal sunlight location, not everywhere on Earth will always see the Lunar "X" phenomenon every month. However, it occurs frequently enough for most areas that it can be seen, on average, every few months. And it's a bright enough feature that it can even be seen in daylight - if you know when and where to look.

So WHERE is it? In the southern section of the Moon, there are a LOT of craters. The southern highlands are filled with them, whereas much of the northern region is dominated by the darker, lava-filled maria. Check out this labelled graphic below to see where the “Lunar X” is visible among some of the larger craters. This graphic shows the "X" as it would appear as it is just becoming visible - see bottom of the page for the "X" at a more prominently lit time.

Visible due to sunlight striking the tops of three craters – Purbach, LaCaille and Blanchinus – the “X” occurs when the sun is rising and striking the very top of each of them. This feature is easily visible even in very small telescopes, and tripod-mounted binoculars can show it to sharp-eyed observers. Despite it's best apparitions occurring when the sky is dark, the “X” is prominent and visible during daylight hours, as seen in the video below. On Dec 9, 2013, the Lunar X will be visible in North America in the evening; start time for fully-formed "X" is at 19:57 EST and 16:57 PST.

Check the dates and times below for Lunar X visibility throughout 2016.

Here is a UTC time converter so you can determine if the Lunar X will be visible for your local time in a given month and year.

For more information on the “Lunar X” see the following pages:

Somewhat less well-known is the Lunar V. This sunlit feature is similar to the X in size, but is visible for quite a bit longer after the "X" has dissolved into the background craters. Created by sunlight striking the tops of the crater Ukert and ridges nearby, the "V" shape is slightly larger than the "X", though quite a bit further north, just south of the small Mare Vaporum. As the "X" becomes less prominent over time, the "V" still maintains a distinct shape and may also be viewed with most any small telescope or tripod-mounted binoculars.  See the graphic below for the location of the "V" relative to the "V" as they look a few hours later - this graphic contains fewer annotations.